We bet you have already watched all of Brosnan's Bond films. It's now time you catch up on his other works too. 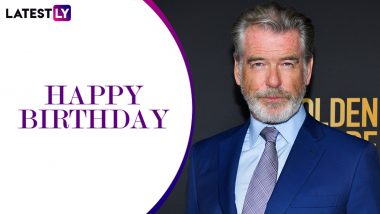 Pierce Brosnan is an Irish actor best known for playing the role of James Bond. The actor began his career with stage acting and later made it big on Television with Remington Steele. He also appeared in films such as The Fourth Protocol and Mrs Doubtfire among others. The actor essayed the role of the 007 for four films snd soon became a favourite. Although after leaving the Bond franchise, the actor continued to entertain us in stunning films. Pierce Brosnan Would Love to Return to James Bond Franchise as a Villain, Reveals Qunetin Tarantino Once Pitched a Bond Film to Him.

As the actor celebrates his birthday on May 16, we look at his best films other than the Bond films. In terms of accolades, the actor has He has earned two Golden Globe award nominations, first for the television miniseries Nancy Astor (1982) and next for the dark comedy film The Matador (2005). After being a successful star on stage, Brosnan made sure to go even bigger with films. Here's a look at his non-Bond films we love. Pierce Brosnan Saved Halle Berry From Choking While Filming a Love Scene in Die Another Day.

Talk about disaster films and this will ring a bell. The film is set in the fictional town of Dante's Peak where the inhabitants fight to survive a volcanic eruption. The film starred Brosnan and a string of other actors.

The film follows Brosnan in the role of Thomas Crown, a multi-millionaire who steals a painting from an art gallery. Not only did the actor look suave but also gave a fitting performance.

This musicak ia a favourite for all Merl Streep fans and we bet you can't get enough of it. Brosnan starred in the role of Sam Carmichael, Sophie's possible father and an architect. He looked wickedly handsome in the film and left everyone swooning.

In this political thriller, Pierce Brosnan bagged a rather meaty role as Adam Peter Bennett, a former British Prime Minister. The actor was seen in a lead role along with Ewan McGregor. Fans of Brosnan loved him in this film.

Based on the novel There Are No Spies, this spy thriller starred Brosnan in an action packed role that reminded us of Bond. The 2014 film recieived decent responses and mainly all praises for Brosnan. If you haven't yet, check out this amazing thriller.

We bet you have already watched all of Brosnan's Bond films. It's now time you catch up on his other works too.

(The above story first appeared on LatestLY on May 16, 2020 09:28 AM IST. For more news and updates on politics, world, sports, entertainment and lifestyle, log on to our website latestly.com).