The "Isn't It Romantic" star has featured in Jonas Brothers' latest music video "Sucker". The two were also seen vacationing with family in Miami. 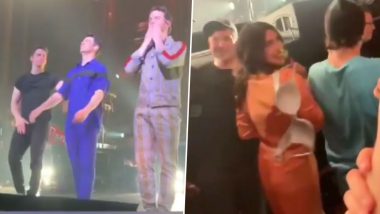 Los Angeles, April 1: A fan threw her bra away at actor-singer Nick Jonas' concert here, and his actress wife Priyanka Chopra Jonas was only too happy to pick it and pass it as a "fan message". In the videos that have surfaced online from the Atlanta concert, Priyanka is seen picking up the blue coloured bra at the concert. Priyanka Chopra Attends Her First Jonas Brothers Concert in Atlanta, Actress Cheers the Terrific Trio – Nick, Kevin and Joe! See Pics, Videos.

Priyanka, who was attending her first Jonas Brothers' concert, cheerfully picked up the bra at the gala to give it to her husband Nick. She even put a video on Instagram in which she is seen walking away with a blue bra in her hand. "Collecting fan messages for the hubby! Happy to pass along! Lol," she wrote alongside the video in which she is smiling away.

Priyanka also posted a backstage video on her Instagram stories, where she was seen cuddling up to Nick and was heard saying: "This is my first Jonas Brothers concert and I am very excited and proud of them."

The "Isn't It Romantic" star has featured in Jonas Brothers' latest music video "Sucker". The two were also seen vacationing with family in Miami.

(The above story first appeared on LatestLY on Apr 01, 2019 01:29 PM IST. For more news and updates on politics, world, sports, entertainment and lifestyle, log on to our website latestly.com).