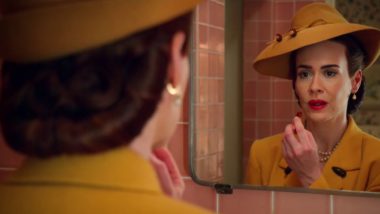 Sarah Paulson plays the role of Nurse Ratched in the new Netflix series, Ratched. The series created by Ryan Murphy and executive produced by the actress tells the origin story of the iconic character from the novel, One Flew Over The Cuckoo's Nest. There will not be a  new season of American Horror Story this year because the principal photography was delayed due to the pandemic. So, can Ratched fill the voice left by the lack of AHS for the fans? Seems unlikely. The series has received majorly negative reviews from the critics. Ratched Trailer: Sarah Paulson Promises to Creep You Out With Her Sinister Side In Netflix's Psychological Thriller (Watch Video).

The Guardian's Lucy Mangan was impressed by the series. She wrote, "It is all the most excellent fun. Paulson conveys a fathomless darkness while appearing to do almost nothing. When moments of viciousness break her affectless surface, it is genuinely disquieting. Another award surely beckons, to add to the others she has accrued under Murphy’s aegis."

Firstpost wrote, "[Ratched] has the signature Ryan Murphy aesthetic that in its own way is almost as distinctive as say, Wes Anderson's: a profusion of pastels, the gorgeously constructed indoor and outdoor frames, the juxtaposition of horror and luxury. With all of that visual beauty and a stellar cast going for it, Ratched still falters." Ratched Trailer: Sarah Paulson Flies Over The Cuckoo's Nest In This Gripping Ryan Murphy Thriller For Netflix (Watch Video).

Vulture wrote, "There are no moments of honesty in Ratched. There is no cunning or intelligent design. There is no guiding theme rendering anything with import. There is neither tension nor suspense. The longer you make the slog through its endless-feeling eight episodes the more it becomes apparent what a profound waste of time this exercise is."

The New Yorker wrote, "Perhaps this is the central weakness of “Ratched”: there is nothing bubbling underneath the surface. Romansky and Murphy throw everything at the screen, and all at once."

In all Metro summarised the series, "Ratched is style over substance again. But what style."

(The above story first appeared on LatestLY on Sep 20, 2020 06:13 PM IST. For more news and updates on politics, world, sports, entertainment and lifestyle, log on to our website latestly.com).