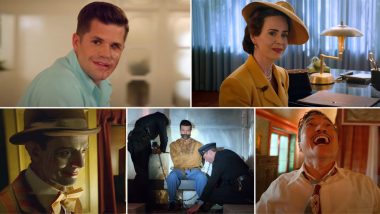 Ryan Murphy's mini-series Hollywood was quite a hit on Netflix. Now, the trailer for his second series, Ratched, for the streamer, has hit the web and it is crazy good. With no new edition of American Horror Story this year (COVID-19 can go rot in Coven hell), Ratched seems like the perfect treat for the fans. If you have not guessed it by the title, or by the unsparing headline of this article, the show is inspired by the hit classic novel, One Flew Over The Cuckoo's Nest by Ken Kesey. The series will tell the origin story of the wicked, twisted origin story of Nurse Ratched. American Horror Story Creator Ryan Murphy Confirms He is Working on Scream Queens Season 3.

Sarah Paulson plays the titular character. And from the trailer itself, it is evident that she has given her everything to play the character. Well, she always does. Maybe not for Ocean's 8 though. Ryan Murphy Reveals That He Signed Jim Parsons For Hollywood So That He Could Leave Sheldon Behind.

Watch The Trailer For Ratched Here:

Phew, that was a ride. Right? Ryan Murphy has infused this dark tale with a burst of colours. The colour palette looks carefully crafted, almost dizzying, hallucinogenic. The background light switches to red as one character gets high on some kind of drug.

Ratched was created by Evan Romansky and executive produced by Murphy and Paulson.

(The above story first appeared on LatestLY on Aug 05, 2020 01:08 PM IST. For more news and updates on politics, world, sports, entertainment and lifestyle, log on to our website latestly.com).