Robert Pattinson Birthday Special: From the Batmobile Chase to Escaping the GCPD, 5 of the Actor’s Best Moments as Batman

This year, we saw Pattinson return to blockbuster films after a really long time with The Batman. Playing the role of Bruce Wayne/Batman, he gave a character defining performance that got the Dark Knight completely right. 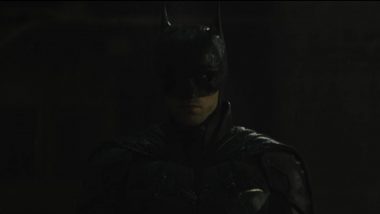 Robert Pattinson has come a long way from Twilight. Being one of the most sought-after actors in Hollywood and an indie darling, Pattinson has made quite a name out of himself in the last few years. From starring in films like Good Time and The Lighthouse, Pattinson has proven himself to be an actor with an exceptional amount of talent. He has constantly raised the bar and keeps one upping himself with his performances. The Batman 2: Sequel to Matt Reeves and Robert Pattinson’s Film Is Happening.

This year, we saw Pattinson return to blockbuster films after a really long time with The Batman. Playing the role of Bruce Wayne/Batman, he gave a character defining performance that got the Dark Knight completely right. So, with that being said, let’s celebrate Robert Pattinson’s 36th birthday by taking a look at five of his best moments as Batman. The Batman Movie Review: Matt Reeves & Robert Pattinson Deliver the Definitive Version of DC’s Dark Knight! (LatestLY Exclusive).

At Gotham Square, Riddler’s followers are open firing with no hope being there. Suddenly the roof explodes as the Bat drops down and starts taking them on one by one. The build up to it is perfect as we see Batman in action taking everyone out. The scene is only made better as after the fight Batman helps save the civilians.

The movie opens with a tense narration as we see a montage of crime taking place in Gotham city. This is first where we hear Pattinson’s voice as Batman and his experience being a vigilante in Gotham for two years. It’s a chilling sequence that gets everything right about the character.

After we get his introduction, we are treated to a bunch of thugs harassing an elderly gentleman at the train station. We then see sound coming off in the background as the footsteps slowly start to become more audible and the Batman enters out of the shadows. This is where we get the iconic “I’m vengeance” line.

After Batman is apprehended by the GCPD for interfering with the Gil Colson situation, he wakes up to find his mask being taken off by a policeman. Waking up aggressively, he gets taken into a corner by Gordon who tells him that he has to get out of there. What follows is an intense chase that sees Batman use his wingsuit for the first time.

The Batman not only has the best Caped Crusader introduction, but also the best Batmobile introduction. After Penguin starts closing in on him, you quickly hear a jet engine roaring in the background as the car starts revving up. The chase followed by it is just the cherry on top of the cake.

We can’t wait to see Robert Pattinson return as the Dark Knight in The Batman 2. With this we finish off the list and wish him a very happy birthday.

(The above story first appeared on LatestLY on May 13, 2022 09:20 AM IST. For more news and updates on politics, world, sports, entertainment and lifestyle, log on to our website latestly.com).