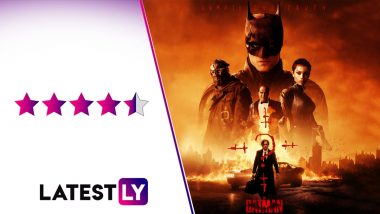 The Batman Movie Review: Batman is one of those unique characters that has benefited from having many different interpretations over the years. We have gotten The Dark Knight, we have gotten the Caped Crusader, but we have never really gotten the World’s Greatest Detective. From Ben Affleck to Christian Bale, the previous versions of the character hardly focused on his detective side. Well The Batman completely delves into that and delivers a neo-noir crime thriller that ranks among the character’s best stories. Matt Reeves Skips The Batman Premiere Following His COVID-19 Diagnosis.

The Batman directed by Matt Reeves sees our Dark Knight in his second year of crime fighting. Gotham is a dark and desolate place with corrupt officials everywhere. The Riddler emerges out of the darkness of the city and starts taking them out to unmask the truth. Batman has to stop him and put an end to this madness.

Right off the bat (pun is definitely intended), the movie starts out like a horror film. In the way it’s framed, Matt Reeves introduces us to a dark and depressing Gotham where hope isn’t present at all. The world building for Gotham is unlike anything we have ever seen before. The city feels like a living, breathing character with so much history behind it. Featuring gothic vistas and brown and dirty streets filled with corruption on every side, this is a world that I want to see more of.

With how Gotham is explored, comes the backstory of some major players present too. What Reeves does extraordinarily well over here is how he presents these characters. With this not being an origin story, you can still feel that each and every character has some kind of relationship behind them. They are lived in and have an experience in this dark and desolate place that has left them without hope.

It’s amazingly presented and it’s something that previous Bat-films were seriously lacking. Watching this movie felt like flipping through the pages of a Batman comic because it really is an accurate representation of the world from the books.

Talking about characters, every one of them has something to add into the story. Starting off with one of my favorite side characters in the movie, Jeffrey Wright is amazing as James Gordon. Throughout the movie you can feel that Gordon is himself fed up with the police department and doesn’t trust anyone and that lends so much more into his character. His relationship with Batman also feels natural and you see their friendship develop through this film, and I think that was a great way to represent the relationship of these characters.

Zoe Kravitz as Selina Kyle/Catwoman is amazing too. She has a real arc in the film that leads her into some really interesting places, not to mention the revelations surrounding her. Kravitz really embraces the femme fatale nature of the character and gives a great performance. Colin Farrell is unrecognizable as Penguin, and he absolutely hams it up in this role. It's as if Farrell approached Matt Reeves with a massive piece of ham and asked how big he should cut up the slices. You could see that he was truly enjoying the role. Andy Serkis as Alfred is great as well, although not much in the film, his complicated relationship with Bruce is explored extremely well.

Paul Dano as the Riddler is terrifying, although I hoped we could have spent more time with him. There is a good chunk of the movie where he isn’t present, but his goals and why he does what he does makes a lot of sense. While not as good as Heath Ledger’s Joker from The Dark Knight, Dano gives one of the best performances as a DC villain since then. He is maniacal, his riddles are terrifying and he is unhinged. John Turturro also stars as Carmine Falcone and gives another great performance in the film.

Now I need to address the thing that everyone will be asking, and that’s how is Robert Pattinson as Batman? Simplest way to answer that will be by saying that he is perfect for this version of the character, and is possibly my favorite interpretation of him put yet on the screen.

Previous to Pattinson, we have had six actors play the Dark Knight. We have gone from the campiness of Adam West and Clooney to the deep and gritty portrayals of Bale, Keaton and Affleck. Pattinson makes this role his own by giving us the most accurate representation of the character yet. We see Batman in his second year and you can see him being very rough around the edges. While Affleck’s portrayal was more gruff and older, Pattinson brings the heat with his vengeful take on the character.

Throughout the movie Bruce is a reclusive figure that hardly makes any public appearance. He is obsessed with being Batman. Pattinson portrays him in a stoic sense with a quick fuse and that works wonders. He doesn’t have much dialogue and conveys so much through his eyes. It’s really neat character stuff that I dug, and the arc Bruce goes through in this film is phenomenal.

The story lends itself to being a character study on Batman as he solves crimes, and it really leads into the noir aspects. Riddler’s games are taking a toll on everyone, and the story presents that amazingly well. It doesn’t have many deep themes, but rather it’s a character driven film that talks about the impact of vengeance on many. I loved the story and how it represents Batman.

The Batman also has short bursts of action sequences that are brutal and hard hitting. My favorite in particular being a car chase that presents the Batmobile as this scary figure, and it is filmed amazingly. Greg Fraser of Dune fame takes over the cinematography duties. Each shot is framed so meticulously that it’s hard not to be wowed by it at every second. Michael Giacchino also provides a soundtrack that’s bound to be iconic immediately.

Honestly the only complaint that I have about this movie is that during the end it feels like it would have ended at a particular moment, but it continues to go on. Otherwise the three hours are just going to fly by. The Batman Review: Critics Call Robert Pattinson's DC Film an Excellent Noir, Dark and Gritty Adventure!

Ending is a Bit Choppy

After a five year long wait, The Batman is everything I wanted and more. Watching this movie gave me the same feeling I got when flipping through the pages of Batman: The Long Halloween and Batman: Year One. Pattinson and Reeves have finally perfected the character on the big screen. The Batman releases on March 4, 2022.

(The above story first appeared on LatestLY on Mar 03, 2022 09:59 AM IST. For more news and updates on politics, world, sports, entertainment and lifestyle, log on to our website latestly.com).