Big Little Lies actress Shailene Woodley, who confirmed her engagement to National Football League (NFL) star Aaron Rodgers in February, says she is in no rush to get married. 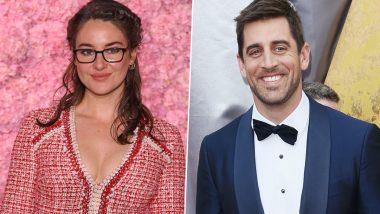 The actress will next be seen in the romantic film "The Last Letter From Your Lover". The film is set in the 1960s and sees her character Jennifer embroiled in a love triangle with husband Laurence (Joe Alwyn) and her admirer Anthony (Callum Turner). She said she jumped at the chance to work with director Augustine Frizzell in the film, because it was a project that appealed to her love of "love". Shailene Woodley Birthday Special: A Look at Some of her Most Ravishing Fashion Moments (View Pics).

She said: "I love love and I love Augustine. I had met Augustine a few months prior to reading the script and I really just fell in love with her entire being and what she was about and the way she saw the world and I thought she was just a really groovy, unique chick in this industry." "I got sent the script, because she was involved, and fell in love with the storyline and fell in love with specifically the two characters of Anthony and Jennifer because there's such a deep intrinsic connection between the two of them, and it seems like life wanted them to stay apart.

That's how I got hooked," the actress added. Woodley had recently explained that she and Rodgers initially kept their romance out of the spotlight, but chose to confirm their engagement because they didn't want someone else to do it for them.

(The above story first appeared on LatestLY on Jul 21, 2021 03:28 PM IST. For more news and updates on politics, world, sports, entertainment and lifestyle, log on to our website latestly.com).