Empire critiqued: "It feels like a show that doesn’t know whether it wants to be a farce or a sitcom." 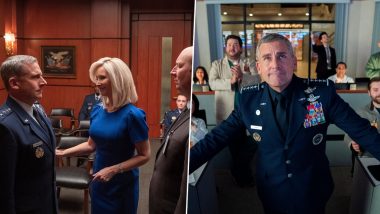 Actor Steve Carell and creator Greg Daniels have reunited for a new show, Space Force, after the global success of comedy series, The Office. The new show premiered on Netflix and, of course, everyone's first instinct is to compare it to brilliance of The Office. Space Force, despite being set at a workplace is entirely different from its comparative entity. The show is based on the popular Space Force that the Trump administration has launched for Space Warfare. But how good it the show? Hear it from the top critics. The Office Cast Pulls a Surprise Appearance on John Krasinski's Web Podcast; Celebrates Fan’s Wedding By Recreating an Iconic Moment From the Show (Watch Video).

Rolling Stone was not too impressed by the new show. They gave the new venture two stars out of five with a headline that the 'Netflix Comedy Suffers Failure to Launch'. The publication explained the lead character's "destructive behaviour would make Space Force a difficult binge even if all the other elements were perfectly balanced. But too much of it keeps finding new ways to waste the incredible amount of talent and money on display here."

The review spends most of the length in drawing comparisons between Space Force and The Office. "And the scale of the thing makes The Office look like a TikTok video in comparison. "

Independent wore that "the series struggles to get out from under the biggest joke of all, which is that it is based on a real US government department. It’s material for a sketch, rather than a whole series, and it would be funnier if it wasn’t true."

ScreenRant wrote, "Despite one of the better pilots for a sitcom in quite some time, one that cuts through the usual information dumps in favor of some genuine and much-needed laughs, Space Force seems to run out of steam too quickly in its first season. In particular, it struggles to deliver a storyline befitting its stacked cast and, more troubling, to deliver on its concept, which is meant to skewer the creation of the real-life branch of the military of the same name."

But they added that "it’s not a complete disaster" and "every episode of the first season offers its fair share of laughs".

IndieWire liked the show and wrote, "Together, Carell and Malkovich forge a charismatic pair that could carry even more episodes than they already do," adding, "Also helping to elevate the serviceable comedy is the gleaming production itself."

Empire critiqued: "It feels like a show that doesn’t know whether it wants to be a farce or a sitcom."

Variety noted that "there was, clearly, no expense spared in the making of" the show but called the ten episodes "really just okay". They added, "...when “Space Force” tries to go bigger or more inspiring with its plot, it buckles under the weight of its own ambition."

(The above story first appeared on LatestLY on May 29, 2020 05:10 PM IST. For more news and updates on politics, world, sports, entertainment and lifestyle, log on to our website latestly.com).