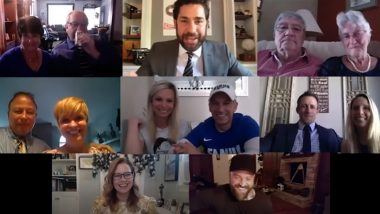 American actors John Krasinski and Steve Carell virtually reunited again, this time with more 'The Office' co-stars. According to People Magazine, the cast reunited to surprise a newly married couple Susan and John, who held their wedding virtually with the 40-year-old star Krasinski serving as the officiant on his virtual show 'Some Good News'. Krasinski said as he replayed the couple's 'The Office' - inspired proposal, "Perhaps my favourite love story of the week was a couple down in Maryland, whose wedding proposal was oddly familiar. The Office Cast Offers Virtual Coffee Dates for Fans Who Donate For Their COVID-19 Charity.

"The bride said of the proposal, "Just like Jim, he couldn't wait any longer."Then, the ' A Quiet Place' star Krasinski invited their families to join them via Zoom. "But we have someone else in mind," Krasinski said after surprising the couple with their best man and maid of honour. The actor nominated himself to also be the honorary best man and introduced Jenna Fischer as the honorary maid of honour. Also, Country star Zac Brown performed a special song making the ceremony special. The Office Producers Announce New Comedy Series About Zoom Calls Inspired By Video Meetings Gone Wrong During COVID-19 Pandemic.

After they made their marriage official, Krasinski and Fischer were joined by Carell, Mindy Kaling, BJ Novak, Rainn Wilson, Angela Kinsey, Ellie Kemper, Kate Flannery, Brian Baumgartner, Ed Helms, Phyllis Smith, Oscar Nunez and Creed Bratton. Krasinski said, "There's only one way out of this wedding. And Susan and John, because you elegantly ripped off our proposal, I think it's only fitting that you rip off the wedding too."Recreating the show's spontaneous wedding entrance individually from their respective homes, the group danced to "Forever" by Chris Brown. Just like the memorable dance sequence from season 6 when Jim (Krasinski) and Pam (Fischer) were getting married.This marks the second virtual reunion for Carell and Krasinski.