Spider-Man No Way Home: Ranking All the Live Action Films of the Webhead in Anticipation of Tom Holland’s Next Marvel Film! 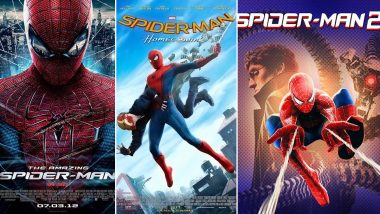 Spider-Man right now is one of the most popular characters in any medium. Say it be live action, videogames, comics and animation, Spider-Man has had some of the best last few years. This Thursday we are being treated to Spider-Man: No Way Home, the third film in Tom Holland’s trilogy. Fanfare for this film has been extremely high as promos have shown that it will bring all the live action film sagas of the wall crawler together. Not only that, but the promos have also been teasing a grand scope that no spidey fan can miss. Spider-Man No Way Home Movie: Review, Plot, Cast, Trailer, Release Date - All You Need to Know About Tom Holland's Highly Anticipated Marvel Film!

Spider-Man: No Way Home sees Peter Parker’s identity being revealed as Spider-Man and wrongfully being framed for murder. Enlisting the help of Doctor Strange to make everyone forget he is Spider-Man, the spell goes wrong and villains start entering from the multiverse making this Peter’s greatest challenge yet. With Spider-Man: No Way Home bringing the previous two sagas of Spider-Man together, it only seemed fit to rank all the live action Spider-Man films. So here are all the live action Spider-Man films ranked ahead of Tom Holland’s next Marvel release. Spider-Man No Way Home Box Office: From Early 6 AM Shows to Tickets Sold as High as Rs 2K, Tom Holland's Marvel Film Sees Huge Pre-Release Business in India.

While on a technical level The Amazing Spider-Man 2 was a marvel, it faltered heavily in its storytelling aspects. The sequel saw Spider-Man face the likes of Electro, Green Goblin and Rhino. The film was so overly stuffed that it made everything messy as it focused more on building sequels than telling its own story. Not only that, some villains like the Goblin and Rhino didn’t get enough screen time. Although Gwen’s death was done quite well as it did hit really hard.

Like The Amazing Spider-Man 2, Spider-Man 3 also had issues like too many villains and not enough time given to them. Spider-Man 3 saw Peter get the black suit while learning the truth about Uncle Ben’s death and also facing the vengeance of Harry Osborn upon him. While the story with Sandman was a highlight, the film still ultimately faltered due to just how rushed many of the storylines felt. Especially the Symbiote storyline and just how shoehorned Venom felt.

The second solo Spider-Man film in the Marvel Cinematic Universe sees Peter Parker travel to Europe on vacation where he ends up fighting the elementals from the multiverse all the while Mysterio helps him. The film was a really fun adventure that had a flawed first act, but a really great second act. Released right after Avengers: Endgame, it did well in showcasing a post-endgame world and the mid-credits sequence set up something really neat.

Where it all began, Spider-Man was a huge deal when it came out. Coupling campy with serious storytelling, Sam Raimi revolutionised comic book films for modern audiences and delivered a great film that honoured the character. Seeing Spider-Man face the Green Goblin was great and featured what many people think are the definite version of these characters. Tobey Maguire’s portrayal of Spider-Man to this day is still considered the gold standard for any Spider-Man media.

Spider-Man’s first solo outing after an extremely great debut in Captain America: Civil War, Spider-Man: Homecoming finally gave Spider-Man fans what they were looking for, a Spider-Man story that takes place in high school. Seeing a wall crawler film wrapped in a coming-of-age school comedy film was all I ever wanted and Homecoming delivered that really well. Not to mention Michael Keaton’s vulture was a top tier Spider-Man villain.

This will be quite the controversial entry for many. The Amazing Spider-Man is quite the divisive film, although in recent years reception has been more positive. While the Lizard as a villain was quite lackluster, the movie did a great job of portraying the inner struggle of Peter Parker/Spider-Man. I think this is one of the films that gets the character extremely right and the visual cinematography does Spider-Man justice. Not to mention the chemistry between Andrew Garfield and Emma Stone was, no pun intended, amazing.

Talking about the gold standard for Spider-Man films, Spider-Man 2 is what gets everything right about “with great power comes great responsibility.” A loose adaptation of the Spider-Man No More storyline, Spider-Man 2 sees Peter lose his powers all the while trying to maintain his personal life. It also complicates things for him once Doc Ock starts causing havoc. This is an all-timer for superhero movies and one that will have any Spider-Man fan giddy.

(The above story first appeared on LatestLY on Dec 13, 2021 08:44 PM IST. For more news and updates on politics, world, sports, entertainment and lifestyle, log on to our website latestly.com).