Sylvester Stallone before Rocky was just another struggling actor. Stallone arrived in New York with nothing to his name, but hopes of making it as an actor in Hollywood. He earned critical acclaim for his role as Stanley Rosiello in The Lords of Flatbush which started getting him cast as an extra in movies. 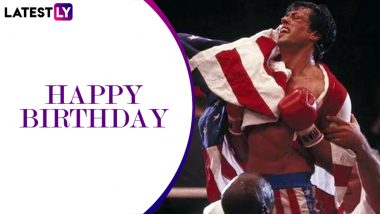 Sylvester Stallone before Rocky was just another struggling actor. Stallone arrived in New York with nothing to his name, but hopes of making it as an actor in Hollywood. He earned critical acclaim for his role as Stanley Rosiello in The Lords of Flatbush which started getting him cast as an extra in movies. He then went on to earn worldwide success as he starred in Rocky, a movie written by him where he plays the role of Rocky Balboa, an underdog boxer who works his way up to the top. Sylvester Stallone Refutes Reports of Joining Donald Trump’s Mar-a-Lago Club.

Since 1976, Rocky has been an important milestone for sports drama’s in Hollywood. It revolutionised what could be done with a rags to riches story and till this day has inspired people to be greater than themselves. While some of its subsequent sequels might have steered off the path making the tone of the series more campy than it was originally conceived to be, the movies never lost the core spirit. Rocky is now continued in the form of Creed, which follows the son of Apollo Creed, Adonis Creed, and how he is trained under Rocky’s wing. The Suicide Squad: Sylvester Stallone Joins Cast, Director James Gunn Heaps Praise on His Acting Calibre.

But since it’s Sylvester Stallone’s 75th birthday, we are ranking all the original six Rocky films from worst to best.

The fifth installment in the Rocky franchise picks up right after where Rocky IV ended. It’s one of the more looked down upon movies in the franchise as it never really captured the high of the previous four films. It focused on how Rocky was losing touch with his family as he was training an up and coming boxer, Tommy Gunn. Stallone, while still great in the role, never managed to achieve the highs of the franchise just because of how much it steered away from the formula. It just sticks out as a black sheep of the franchise just of how detached it feels from the series.

There is just something about watching Rocky get trained by Apollo Creed in order to defeat Clubber Lang. It showed our hero getting vulnerable, and how he had to learn from his mistakes and hit back harder. Coupled with a really good training montage and gifting us the song, "Eye of the Tiger", Rocky III is just too much fun to watch. Plus seeing Sylvester Stallone and Mr T exchange punches was just a treat for the eyes.

Rocky IV is ‘80s personified. It had everything you would expect from an ‘80s action film. You have a bunch of training montages set to some of the popular songs of the time, USA is facing off against Russia in a boxing match, and it just feels too patriotic all around. Rocky IV was the first signal that the tone for the next two movies is going to be more campy compared to the previous three. While it has a bit of mixed reception in the Rocky fanbase, no one can deny that this one epic over exaggerated blast of a film to watch. Just seeing Dolph Lundgren and Sylvester Stallone, two of the biggest action stars of all time fight each other was just a sight to behold. Packed in with a kickass soundtrack, Rocky IV is just a great 90 minutes to spend on.

The rivalry continues between Apollo Creed and Rocky as both clash for the second time. Not satisfied with his victory against Rocky in the first film, Creed pushes for a rematch. It has all the heart that made the first film so impactful, and while still not being able to reach those highs, Rocky II manages to be a great watch fueled by Stallone and Carl Weathers’ incredible performances.

Returning to form for the Rocky franchise, Rocky Balboa sees an aging Rocky, who after the death of his wife starts a restaurant in her name. Although he feels like he still has one fight left in him and pushes to get back in the boxing ring. It’s a great movie that captured everything that made the Rocky franchise so inspirational in the first place. Coupled this with great character-driven drama and a story that honours the ones that came before it, you have a great conclusion to an iconic series.

The one that started everything, Rocky shot Stallone to fame as he created one of the most iconic characters and films of all time. Rocky tells the story of underdog boxer Rocky Balboa, who tries to make his way to the top and eventually fights Apollo Creed, a boxing champion. It was a great sports drama that melded a rags-to-riches story and essentially stood as a pillar of excellence in the genre.

(The above story first appeared on LatestLY on Jul 06, 2021 09:11 AM IST. For more news and updates on politics, world, sports, entertainment and lifestyle, log on to our website latestly.com).