American actor Sylvester Stallone broke his silence and denied reports that claimed he has become a member of former US President Donald Trump's Mar-a-Lago club. 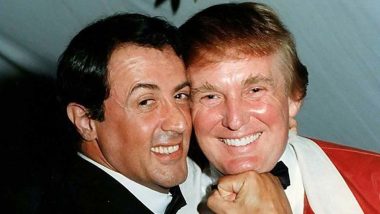 American actor Sylvester Stallone broke his silence and denied reports that claimed he has become a member of former US President Donald Trump's Mar-a-Lago club. Several reports surrounding Stallone buying a property at Donald Trump's Mar-a-Lago club have been doing the rounds since the pictures of the 'Rocky' star entering inside the club went viral on social media.

The actor's reps, however, told TMZ that he is not, and has never been, a member at Mar-a-Lago. The Suicide Squad: Sylvester Stallone Joins Cast, Director James Gunn Heaps Praise on His Acting Calibre.

"He was recently an invited dinner guest at the club, but does not own a residence on the golf course, nor has he paid for a membership," the rep added. Meanwhile, the 74-year-old actor himself confirmed the news through an Instagram post on Tuesday. He shared a picture of a newsletter with a headline that reported the wrong news. In the caption, he wrote, "I would like to say to everyone that this never happened. This is just not true. It NEVER ever happened..I mean no disrespect to anyone, I'm simply not a member .. So Keep Punching Folks." Sylvester Stallone Hits the Beach With Wife Jennifer Flavin and Daughters Sophia and Scarlet.

The Mar-a-Lago club is an informal group organised by Trump which oversaw many of the activities of the Department of Veterans Affairs during his presidency. Historically, in 1985, Mar-a-Lago was purchased by Donald J. Trump for around USD 10 million. He used the mansion as a residence for eight years, before converting it into the Mar-a-Lago Club. His family maintains private quarters in a separate, closed-off area of the house and grounds.

While the actor is not a member at Mar-a-Lago, he remains a member of The Breakers Club, also located in Palm Beach.