The Lost City is an upcoming film directed by Adam and Aaron Nee. It stars Sandra Bullock, Channing Tatum, Daniel Radcliffe and Brad Pitt. It releases in theatres on April 8, 2022. 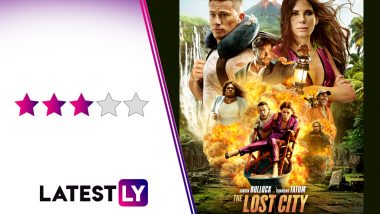 The Lost City Movie Review: Sometimes you just want to sit and watch a film and not really want to see it reinvent the wheel or anything. You just want to sit there and be entertained for some 90 or 120 minutes, and that is exactly what The Lost City is. It feels like a throwback to the adventure films of the ‘90s and that’s one of its most charming factors. The Lost City Review: Early Reactions Praise Sandra Bullock, Channing Tatum's Adventure Film; Say It's a Throwback to Early '90s Comedies.

The Lost City follows novelist Loretta Sage (Sandra Bullock), who is kidnapped by a businessman Abigail Fairfax (Daniel Radcliffe) to find The Lost City which possesses a very valuable ancient artifact. In the mix is Alan (Channing Tatum), Loretta’s cover model who does his best to save her from Abigail.

Like I mentioned, this film feels like a throwback to the classic adventure comedies we used to have back in the ‘90s. It’s extremely funny with just enough heart to it where you can relate to the characters and understand their problems. Loretta is a depressed romance novelist who is just about to give up on her career, and Sandra Bullock gives one of the most fun performances in her career that you will see in a while.

Channing Tatum also gives one of the funniest performances of his career since 21 Jump Street. He plays the young, dumb and extremely good looking Alan who is the cover model for Loretta’s books. Alan has a fun arc in The Lost City where he wants to prove that he is just more than a cover model, and that arc sticks its landing quite well. By the end of the film I really felt like I was looking at a new character and I loved that about him.

Daniel Radcliffe also hams it up as Abigail Fairfax (I just can’t help but laugh at the name) and gives quite an enjoyable performance, albeit in some parts, it gets too much. Brad Pitt is for the 10 minutes but he kills it. Just called Jack Trainer because he trains people, he just comes in with his charm and gives some of the most entertaining bits of the movies.

The story is also a good one. It has that ‘finding yourself’ element to it and I think it worked well for the characters that were present here. Although the one thing that bugged me was how they set up this adventure to be filled with mythology and stuff, but that part of it takes a backseat until the final act.

You sort of expect them to dive deep into the treasure in some way, and it never happens. It felt like that was just kept there as a backdrop for the movie to actually have some conflict rather than it be a natural part of it.

It also runs into the occasional clichés that plague the franchise. There seemed like a point where the movie was creating a conflict and was going to go deep with it, but it just got resolved in the next scene like it was nothing. The Lost City Movie: Review, Cast, Plot, Trailer, Release Date – All You Need to Know About Sandra Bullock and Channing Tatum's Adventure Film!

The Lost City is also extremely funny. There is some great character comedy done here that I enjoyed a lot and directors Adam and Aaron Nee knew exactly what they were doing. All in all, I really enjoyed my time with The Lost City.

The Lost City gave me exactly what I wanted and that was two hours of a fun adventure where I could just turn off my brain and enjoy it. It won’t reinvent the wheel, but you can be damned sure that it will leave you with a smile by the end of it. The Lost City releases in theatres on April 8, 2022.

(The above story first appeared on LatestLY on Apr 07, 2022 12:37 PM IST. For more news and updates on politics, world, sports, entertainment and lifestyle, log on to our website latestly.com).