The Lost City is all set to release in theatres on April 8, 2022. The film stars Sandra Bullock, Channing Tatum, Daniel Radcliffe and Brad Pitt. Here's all you need to know about The Lost City. 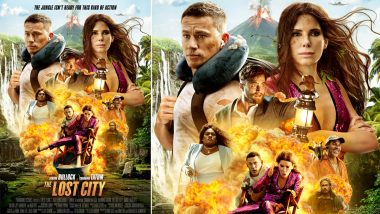 Sandra Bullock and Channing Tatum are set to star alongside each other in the upcoming adventure film The Lost City which releases in theatres on April 8, 2022. Directed by Adam and Aaron Nee, the movie sees a novelist and her cover model go on a trip to find the lost city depicted in her book, all the while escaping a billionaire. The Lost City Review: Early Reactions Praise Sandra Bullock, Channing Tatum's Adventure Film; Say It's a Throwback to Early '90s Comedies.

The cast for The Lost City seems stacked and early word of mouth has really made this movie seem like something special. Sandra Bullock also returns to starring in a blockbuster after a really long time, and honestly it will be exciting to see her back. So if you don't know much about The Lost City, this guide will help you. Here's all you need to know about The Lost City. Dog Movie Review: Channing Tatum’s Road Trip Film is a Heartwarming Journey That Any Dog Lover Will Enjoy! (LatestLY Exclusive).

The Lost City follows a reclusive romance novelist Loretta Sage, who embarks with her cover model Alan Caprison on a journey to find the lost city which is depicted in her book. They do this all the while being chased by a billionaire who wants to kidnap them.

The reviews for The Lost City aren't out yet. As soon as the review comes out, the page will be updated.

(The above story first appeared on LatestLY on Apr 04, 2022 02:14 PM IST. For more news and updates on politics, world, sports, entertainment and lifestyle, log on to our website latestly.com).