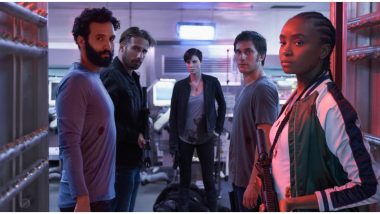 Charlize Theron in on a tirade to star in the coolest action movies as the female protagonist. And she is not watching the action unfold from the sidelines as the men take centre stage, as many old-school Hollywood filmmakers would like it. But, Theron is the action. After remarkable, yet underrated, Atomic Blonde, and the sufficiently praised, Mad Max: Fury Road, the actress features in the Netflix original titled The Old Guard, where she plays an immortal mercenary. The movie will be out on the streamer in a few hours and the words of the critics will only line up the audience at the...whatever is the Netflix equivalent of a ticket counter. Check out the top reviews of the film here. The Old Guard Trailer: Charlize Theron Is an Immortal Mercenary in This Cool Action Film (Watch Video).

The Hindu wrote that the film is eminently watchable but "it’s just that Theron is so ridiculously better than everything and everyone else around her."

The Indian Express wrote, "There are some lax moments, and a bit of portentousness in the dialogue. ‘Just because we keep living doesn’t mean we don’t keep hurting’", further adding, "But in the way of slick superheroes flicks, there’s enough wham-bam, guns rattling and bodies piling up, to keep things ticking over nicely."

The New York Post found the film 'fun' filled with some interesting one-liners. They added, "Cool though the skirmishes are, director Gina Prince-Bythewood’s film could use some more visual panache, given the unique historical backgrounds of her characters. The look, by and large, is rudimentary action flick." Charlize Theron On LGBT Representation In The Old Guard: 'We Should Really Be Telling These Stories And Have The World Catch Up'.

Den of Geek noted that the movie belonged to Charlize Theron. "She not only makes the fighting scenes look effortless, but she remains an actress who can appear sublimely cool and unflappable one minute before blasting you with raw emotion and agony the next — and make it all work cohesively and movingly," they wrote.

The Hollywood Reporter praised the choice of music in the film calling it "an eclectic mix of vocals, encompassing ambient, electropop, rap, hip-hop and R&B, primarily in soft, slow cuts that combine to give the movie a spiritual, trance-like feel that deepens its thematic emphasis on the psychological toll of violence."

(The above story first appeared on LatestLY on Jul 09, 2020 07:32 PM IST. For more news and updates on politics, world, sports, entertainment and lifestyle, log on to our website latestly.com).