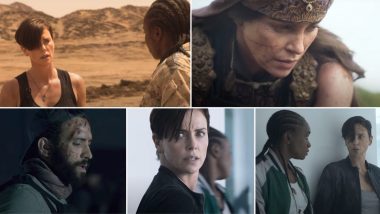 Gone are the days when a movie release used to be preceded by two trailers, one teaser and five million promos. Netflix just casually dropped the second trailer of The Old Guard which is releasing in less than 10 days on the streamer. Well, we hope that is enough time to build the hype for the film. But new world rules are different. Which actually brings us to talk about the plot of the film. A bunch of near-mortal mercenaries continue to learn the rules of the news worlds they live in.

The group, that includes the beautiful and badass Charlize Theron, doesn't die. So, they keep adapting to the changing world. While killing people. The movie is based on a popular graphic novel, written by Greg Rucka and illustrated by Leandro Fernandez. So, if you are a fan of the source material, you would know. It will be interesting to see how the fanbase responds to the adaptation.

Charlize Theron has aced the action genre with movies like Atomic Blonde, Fast and Furious, Mad Max: Fury Road, Hancock. Here, she gets to carry out some impressive action scenes.

Check Out The Trailer of The Old Guard Here:

Directed by  Gina Prince-Bythewood, The Old Guard will start streaming on Netflix from July 10. Theron has also produced the film.

(The above story first appeared on LatestLY on Jul 02, 2020 07:44 PM IST. For more news and updates on politics, world, sports, entertainment and lifestyle, log on to our website latestly.com).