Charlize Theron On LGBT Representation In The Old Guard: 'We Should Really Be Telling These Stories And Have The World Catch Up'

As per reports, it won't be the token LGBT+ representation that the audience is tired of. "When we read it, it was incredibly moving," Theron told Variety talking about the gay storyline between Joe (Marwan Kenzari) and Nicky (Luca Marinelli). 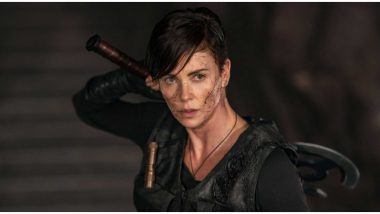 Charlize Theron will be next seen kicking butt as an immortal mercenary in The Old Guard. It is a Netflix original, and will be releasing in a few hours. The movie has generated enough buzz on the internet for the audience to stream it. Word of mouth should do the rest of the magic. One talking point about the film is the inclusion a gay storyline that originates from the Crusade. As per reports, it won't be the token LGBT+ representation that the audience is tired of. "When we read it, it was incredibly moving," Theron told Variety talking about the gay storyline between Joe (Marwan Kenzari) and Nicky (Luca Marinelli). The Old Guard Trailer: Charlize Theron Is an Immortal Mercenary in This Cool Action Film (Watch Video).

Referring to a moving scene where the two men profess their love, Charlize elaborated, "And I remember some people going, ‘Yeah, but can we pull this off? I was like, 'Yes, we can do this.' And then we screen-tested Marwan and Luca together to see how their chemistry would be, and that was the first time we heard an actor actually say those words out loud, to all of us, it felt like one of those moments where you just went, 'Wow, okay. This is new. I have not seen a lot of this.'"

She added, "We do worry so much about those moments because we tend to worry more and try to make the audience feel more comfortable when it really should be the other way around. We should really be telling these stories, just in complete honesty and have the world catch up. Like, get with it. Jump on the bus because it’s leaving." The Old Guard Trailer: Charlize Theron's Badass Avatar Will Remind you of Furiosa (Watch Video).

She also spoke about the statements that were issued by studios in the wake of the Black Lives Matter movement. The actress says that if the studios don't live up to their word and fulfill ther promises, they should be called out.  "If we have to involve some shaming, then that’s what we have to do. If we are silent, even if we’re not the ones not making the right decisions, and we are silent, we are just as culpable, and we have to use our voices. And if we know of situations where we know people are not fully doing the potential that they have to reimagine this world that we’re talking about, and they’re not actively and proactively doing that, then we have to call them out on it. That is our responsibility," she said.

(The above story first appeared on LatestLY on Jul 09, 2020 02:02 PM IST. For more news and updates on politics, world, sports, entertainment and lifestyle, log on to our website latestly.com).