The Royal Treatment Movie Review: Mena Massoud and Laura Marano’s Netflix Romcom is a Clichéd Tale With No Stakes in It! (LatestLY Exclusive)

The Royal Treatment is a Romcom film that is directed by Rick Jacobson and stars Mena Massoud and Laura Marano. It is streaming on Netflix right now. 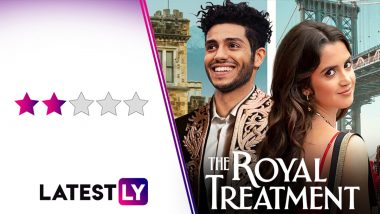 The Royal Treatment Movie Review: The best way to describe The Royal Treatment is, if had Disney never existed then this probably would have been impactful. The Royal Treatment is a romcom that feels like seven other different films of the same genre packed into one. I could pick up one aspect of it, and could have easily compared it to five other movies. While it isn’t exactly bad, in some instances, enjoyable too, but it just feels so uninspired. Hotel Transylvania Transformania Movie Review: Andy Samberg and Selena Gomez’s Animated Film is a Loud, Uninspired Showing With Some Decent Animation (LatestLY Exclusive).

The Royal Treatment sees a young prince named Thomas hire a hairdresser to work at his wedding. In doing so, he starts falling in love with the hairdresser and finds out that is the life he has always wanted to live. Here what you have is the basic concept of a Prince being humanised, and finding that he enjoys himself more when with the common people. It’s a tried and tired concept that has been explored in 100 different films now.

At the core of it, The Royal Treatment still somehow manages to be enjoyable, and that’s because it doesn’t take itself too seriously. Also, thanks to Laura Marano’s performance, without which the film would have definitely lacked charm. She brought this sense of excitement to scenes that you really need. Every character has to play off from here, and you can see her performance compliment theirs in a good way. So it’s a shame that the movie loses quality whenever she isn’t on screen.

Whenever Massoud isn’t sharing the screen with Marano, the movie loses steam. This can also be said for a bunch of other actors in The Royal Treatment. Instead of feeling like original creations, they feel like caricatures of characters that we have seen in Disney movies beforehand. No character feels like they have any depth behind them. I just couldn’t relate to anyone else aside from Marano’s Izzy.

The Royal Treatment certainly has some scenes that will evoke some emotion out of you. It is also paced fairly well. With the movie running for 97 minutes, the movie never gets boring. Which is a big testament considering just how familiar it feels to so many other movies. Although that familiarity does end up hurting it ultimately. Euphoria Season 2 Review: Zendaya’s HBO Series Returns With a Tense But Surprisingly Shallow Episode! (LatestLY Exclusive).

Mistake it not, this a clichéd film through and through. What The Royal Treatment ultimately suffers from is having stakes. It’s a ‘turn off your brain’ kind of romcom, I get that, but the characters are never put in a questionable situation. Sure the argument of the Prince being put into a difficult situation throughout the film can be made, but the urgency of that is thrown out of the window when your movie is filled with clichés and ultimately ends up being predictable.

The Royal Treatment is a film that I have seen a thousand times before. Laura Marano does her best to bring some excitement here, but it just goes all in vain. Had this come out maybe in the last decade or so, I could see this succeeding in some way, but otherwise it just ultimately ends up feeling uninspired. The Royal Treatment is streaming on Netflix.

(The above story first appeared on LatestLY on Jan 20, 2022 08:23 PM IST. For more news and updates on politics, world, sports, entertainment and lifestyle, log on to our website latestly.com).