The pair married one year after getting engaged, according to photos obtained by the Daily Mail. 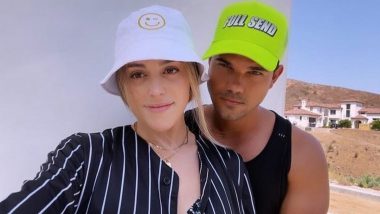 Hollywood actor Taylor Lautner, who is best known for playing the shapeshifter Jacob Black in The Twilight Saga film series, has tied the knot with his girlfriend Tay Dome. The two had been dating for close to four years, reports US Weekly. The pair married one year after getting engaged, according to photos obtained by the Daily Mail. They said "I do" in front of about 100 guests at Epoch Estate Wines in California. The Twilight star proposed to Dome in November 2021 after three years of dating. Paul Mescal and Phoebe Bridgers are Engaged; Couple’s Relationship Status Revealed in Normal People Actor’s Profile Interview.

Lautner shared that his now-wife wanted a simple proposal and told him to "do it in the kitchen." The Michigan native listened to her request, "but did it big in the kitchen," he told 'Access Hollywood' in January. According to US Weekly, the room was surrounded with candles and roses, with a neon sign that spelled out "Lautner" in the background  creating the perfect moment for the longtime couple. James Gunn Marries Peacemaker Actress Jennifer Holland at Picturesque Destination of Aspen, Colorado (View Pics).

"When she came home at the end of the day, after a long day of work, she walked into that," Lautner continued at the time. "It was a lovely surprise." The duo often share their relationship and affection for one another on social media.

(The above story first appeared on LatestLY on Nov 13, 2022 04:29 PM IST. For more news and updates on politics, world, sports, entertainment and lifestyle, log on to our website latestly.com).