While Tom Hiddleston may have won a lot of love for portraying the character of Loki in MCU, the actor had initially auditioned to play Thor. On Jimmy Fallon's late-night show, the audition tape featuring Hiddleston was released and here's how the actor reacted to it. 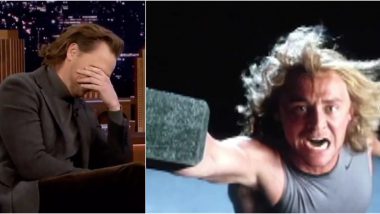 The best thing about Marvel is that even though now we have our favourites when it comes to superheroes, there are several different actors who have auditioned for the same roles and every time we learn about it, we wonder what it could have been to see another actor play the said character. While Tom Hiddleston may have won a lot of love for portraying the character of Loki in MCU, the actor had initially auditioned to play Thor. The role, of course, went to Chris Hemsworth later. Recently, Hiddleston turned up on Tonight Show Starring Jimmy Fallon to talk about his latest Broadway gig. Avengers Star Tom Hiddleston Recalls When He Asked Chris Hemsworth to Hit Him in the Face (Watch Video).

The conversation though soon turned to Marvel and Jimmy had a rather big surprise for fans in store as he released the Hiddleston's Thor audition tape. On the late-night show, Hiddleston spoke about how when the audition came up for the Thor movie, Marvel was originally looking for actors who weren't very well-known so that audiences could really get to know these characters on a deeper level. He also revealed that during the three-month-long audition process, he had been told that if he was over 6 feet tall and had blonde hair, he was welcome to give it a go. Disney Plus Series Loki's First Look Revealed!

After Jimmy revealed that he had, in fact, found the audition tape and that it will be released for the first time ever on Television, Hiddleston was seen facepalming and smiling. The tape shows him on a stage in blonde hair and a tight grey tank top with the hammer. While the audience erupted in applause after watching the tape, Tom was seen saying "too kind" to them. He later also said, "I think we can all agree that they cast the right actor."

(The above story first appeared on LatestLY on Nov 27, 2019 12:10 PM IST. For more news and updates on politics, world, sports, entertainment and lifestyle, log on to our website latestly.com).