Zack Snyder’s Justice League: From The Flash to Cyborg, 9 Things That Stood Out in the Snyder Cut (Spoiler Alert)

After a 3 year long wait, Zack Snyder’s Justice League was finally released on March 18. The movie has so many standout moments that will surely make you geek out. So let’s take a look at some of those standout moments. Note: Spoilers ahead. 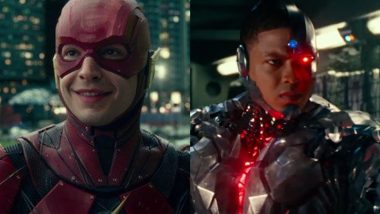 After a 3 year long wait, Zack Snyder’s Justice League was finally released yesterday. Back in the early months of 2017, Zack Snyder had to step down from the directorial duties of the film due to a family tragedy and then the film was taken over by Joss Whedon who was tasked with overlooking and directing the reshoots. These reshoots basically ended up changing a whole lot about the film with the runtime being trimmed down due to which a lot of characters didn’t get enough spotlight and development in the film, and it ended up making the story very rushed and non-coherent. Zack Snyder's Justice League: The Batman-Joker Epilogue Knightmare Scene That Fans Are Tripping On Was Shot With Ben Affleck And Jared Leto Separately.

Now after an online campaign to get the original version of the movie released, we finally do have it. It improves upon the 2017 version in so many ways while giving the characters and the plot room to breathe, even the technical aspects like the soundtrack, the VFX and the cinematography are way better in this. The movie has so many standout moments that will surely make you geek out. So let’s take a look at some of those standout moments. Note: Spoilers for Zack Snyder’s Justice League follow. Zack Snyder’s Justice League Movie Review: A Love Letter to DC Fans (LatestLY Exclusive).

Like the director, even Junkie XL, the film’s music composer was replaced by Danny Elfman. While Elfman’s soundtrack was fine, it had no consistency with the soundtracks present in the previous films, none of the returning themes came back and it just left fans a bit disappointed. With Junkie XL’s new soundtrack there is a lot of consistency present with the previous films and it even brings back a lot of the old themes from Batman V Superman: Dawn Of Justice and Man of Steel.

The History lesson this time is more fleshed out. Instead of Steppenwolf, you get to see Uxas in action who goes on to become Darkseid of course. Everything from the action to the scope of it just makes it look really grand and epic.

Steppenwolf this time feels like an actual villain with motivations rather than just a moustache-twirling villain who dreams of world domination. In some scenes, you even sympathize with him as you can see that he is just trying to get the approval of Darkseid so that he can go back home.

In this movie, you finally get to see Martian Manhunter in the flesh. The fans finally get their pay off for the theory that General Swanwick from the earlier movies was the Martian in disguise. He gets 2 really good scenes with Lois and Bruce.

Coming to the heart of the film, the character of Cyborg/Victor Stone is the best in the film. In many ways, you can even call him the main character of the movie since his entire arc is about acceptance and loss. He is the heart and soul of the film and is acted wonderfully by Ray Fisher.  Zack Snyder’s Justice League Review: Ben Affleck, Gal Gadot’s DC Superhero Film Invites Positive Reactions From Critics!

The scene starts off with a piece of the soundtrack from Man of Steel, moments after being brought back to life you see Clark walk through the scout ship as in the background you hear narration from Jor El and Jonathan Kent harkening back again to, Man of Steel. You see doors open and Clark in the new black Superman suit. He places his hand on the ground ready to take flight as stones around him start to levitate and then we finally have lift off as he flies up to space to get powers from the sun. It’s so goosebump-inducing as you finally come full circle from Man of Steel.

The League Fighting Together

The 3rd act is great because as a comic book fan you finally see all the members of the Justice League united and fighting side by side, which just makes the scale of the entire battle seem so epic.

While we may not get a sequel to this movie, it was still great to see as to what might have happened, an alternate timeline where all hope is lost you see our heroes travelling across a post-apocalyptic landscape. This scene is the only time plus we see this universe’s Batman and Joker interact together, which makes it all the better.

In an effort to separate the motherboxes by cyborg, everything goes wrong and there is a huge explosion that kills everyone in the league except Flash. Injured, he quickly heals himself up and goes back in time to make everything right. That one single moment is the best scene in the entire film since his arc also has a pay off because he saves the league from imminent failure and how he pulls it off is just so amazing.

So here were a few standouts from Zack Snyder’s Justice League. The movie is available right now for streaming on BookMyShow stream, Apple TV plus, Hungama, Google Play and Tata Sky.

(The above story first appeared on LatestLY on Mar 19, 2021 07:48 PM IST. For more news and updates on politics, world, sports, entertainment and lifestyle, log on to our website latestly.com).