Zack Snyder's Justice League: The Batman-Joker Epilogue Knightmare Scene That Fans Are Tripping On Was Shot With Ben Affleck And Jared Leto Separately

Zack Snyder's Justice League is still making DCEU fans go wild for the film. It has turned out to be everything they wanted since the first movie released in 2017. The Batman-Joker scene in the epilogue is getting a lt of love which Ben Affleck and Jared Leto didn't even shoot together. 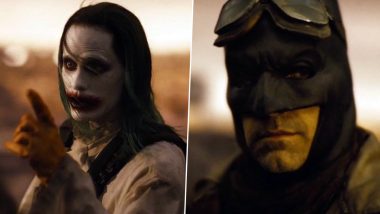 Zack Snyder's Justice League is still trending. People are still getting enamoured by the way the film became a better version of the 2017 movie. The film started streaming on HBO Max yesterday and fans are going wild sharing about it. Most of them have been tripping over the epilogue conversation scene between Batman and Joker. Before we go ahead, here's a disclaimer this is a spoiler. Part of Knightmare sequence that comes at the end of the film, had a host of actors in it but turns out only a few of them shot it together. In fact, Ben Affleck who plays Batman and Jared Leto who played Joker shot the scene separately. Zack Snyder’s Justice League Movie Review: A Love Letter to DC Fans (LatestLY Exclusive)

Deborah Snyder told Insider, "We actually shot Ben separate from Jared. And Ezra was shooting Fantastic Beasts so he was in England and Zack had to direct him over Zoom…It was really fun to be able to do that, to get everyone together to shoot that." Those who were actually together on set were Affleck, Fisher, Heard, and Manganiello.

This is why i love Ben Affleck’s Batman #SnyderCut pic.twitter.com/M9Kr7fiaN7

The sequence has The Flash (Ezra Miller), Cyborg (Ray Fisher), Mera (Amber Heard), Deathstroke (Joe Manganiello), and the Joker (Jared Leto) preparing to battle Superman (Henry Cavill), who has turned evil after a tragedy in a dream. The scene was filmed without all of these actors ever being on the same set. It was also the only new scene in the movie which was shot last year during pandemic and lockdown.

(The above story first appeared on LatestLY on Mar 19, 2021 04:27 PM IST. For more news and updates on politics, world, sports, entertainment and lifestyle, log on to our website latestly.com).