With over 44k votes, this zombie horror series All Of Us Are Dead is unbeatable. It is the most voted series of 2022 so far on IMDb. The Netflix has been renewed for the second season and we believe Lee Cheongsan is returning. 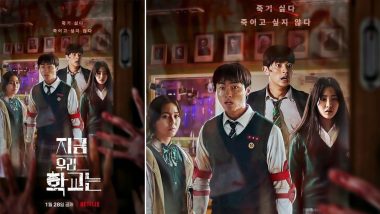 Now we know why Netflix decided to make the sequel to All Of Us Are Dead happen. The series hit the streamer on January 28 and since then it has been six months. A host of Korean dramas have released including the much anticipated Money Heist Korea-Joint Economic Area. In fact, Business Proposal is seen as one of the most successful series on Netflix this year and yet nobody could beat All Of Us Are Dead. With over 44k votes, this zombie horror series is unbeatable. It is the most voted series of 2022 on IMDb. All Of Us Are Dead, True Beauty, Hellbound - 7 Kdramas Based On Webtoons That We Recommend.

It may have been rated 7.5 but if you look at the list, the Korean drama that takes the second place has a lot of difference. Tomorrow comes second has only 8305 votes. Imagine the disparity! Clearly, All Of Us Are Dead has managed to win the hearts of IMDb users in a big way. 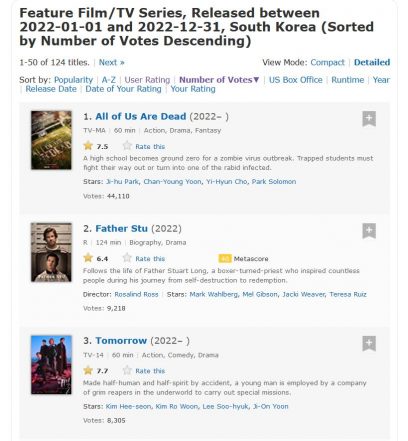 The sequel to All Of Us Are Dead was announced on June 6 this year. The video had the cast making the announcement which also included Yoon Chanyoung who played Lee Cheongsan in the first season. We all know that the end doesn't show if he turned into a zombie and this video makes us believe he is returning in the second season. All of Us Are Dead Ending Explained: Decoding the Climax to Netflix's Zombie K-Drama and How it Sets Up a Second Season! (SPOILER ALERT).

When is the sequel expected? Well, Netflix has not revealed a date yet but we have hunch it might happen by the end of this year.

(The above story first appeared on LatestLY on Jul 05, 2022 08:39 PM IST. For more news and updates on politics, world, sports, entertainment and lifestyle, log on to our website latestly.com).

Comments
Tags:
All Of Us Are Dead Business Proposal IMDB IMDb ranking Kdrama Korean drama Most Voted Netflix Tomorrow
Comments
You might also like