All of Us Are Dead Ending Explained: Decoding the Climax to Netflix's Zombie K-Drama and How it Sets Up a Second Season! (SPOILER ALERT)

While it does overstay its welcome a bit, it still sticks the landing and gives us an ending that tells us the show will return for a second season. So with that being said, here is the ending for All of Us Are Dead explained. 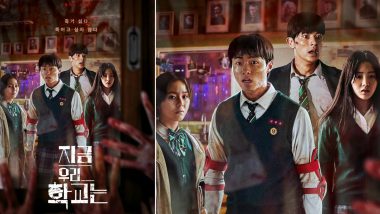 All of Us Are Dead Ending Explained (Photo Credit: Twitter)

All of Us Are Dead is Netflix’s latest hit in their already impressive K-Drama collection. Going into this show, I was a bit sceptical. Most of that scepticism was reserved due to the fact that this was another zombie show that wouldn’t introduce anything new to the table. I was so wrong. Not only All of Us Are Dead is a highly entertaining and tense show, but it even elevates the Zombie genre in so many ways. All of Us Are Dead Review: Netflix’s Korean Zombie Series is Over-Long But Serves a Bloody Good Time! (LatestLY Exclusive).

After a school becomes ground zero for a zombie virus, students must fight their way through the school halls in an attempt to survive and make it outside. Just the premise alone is amazing, and lends itself to so many opportunities. All of Us Are Dead from start to finish is one thrilling ride. While it does overstay its welcome a bit, it still sticks the landing and gives us an ending that tells us the show will return for a second season. So with that being said, here is the ending for All of Us Are Dead explained. Scream 5 Ending Explained: Decoding the Climax of Courteney Cox and Neve Campbell’s Fourth Horror Sequel and How It Sets Up a Sequel! (SPOILER ALERT).

The final episode of All of Us Are Dead sees the city of Hyosan being bombed. The soldiers then go into the city to kill off the remaining zombies and evacuate the survivors that are left there. After raiding Byeong-chan’s house to retrieve his research, they find his missing wife and son chained over there. They are then taken and transported to a lab to be experimented on.

The students who survive, make it to the quarantine zone. Nam-ra decides to go back to the deserted Hyosan city since she is a half zombie now.

We then cut to four months later. People are still in the quarantine zone with people not being allowed to leave in the fear of being infected. Nam On-jo has created a memorial outside the walls to remind people of what they have lost, and to never forget the victims.

After Nam On-jo spots a fire on the terrace of the school from far away, she notifies her friends thinking that it’s Nam-ra who lit it. On-jo and Su-Hyeok decide to escape the quarantine zone and find Nam-ra. They are joined later by the remaining four survivors and inevitably do end up finding her.

After finding Nam-ra, she reveals to them that there are a lot of half zombies still present in Hyosan and that she considers them family. After gaining new powers, Nam-ra reveals that she finally feels like herself now and doesn’t think of herself as an outcast. The season ends with Nam-ra saying that she will be back while she leaps off the school building.

How Does it Set Up the Second Season

Throughout All of Us Are Dead, we see that the plot takes a growing interest in exploring the half zombies. With Nam-ra revealing there are more like her, the second season can potentially deal with exploring more of the half zombies.

The concept itself can also lead to some very interesting instances, seeing as to now we will even have more of them. We can see the half zombies take on the regular zombies, that alone is a very fresh idea that hasn’t been explored much in zombie media. Also there is a lingering fact of the army not knowing the existence of the half zombies, so that can also lead to some interesting plot points

There even is the hanging plot line of Byeong-chan’s wife and son being taken to experimented on, it can hint towards maybe more zombies coming in. But whatever it may be, we will have to wait for a while.

All of Us Are Dead is streaming on Netflix right now.

(The above story first appeared on LatestLY on Jan 31, 2022 02:01 PM IST. For more news and updates on politics, world, sports, entertainment and lifestyle, log on to our website latestly.com).