Lee Min-ho Birthday: A Look at the Best Performances of this K-Drama Actor

Lee Min-ho has an equally huge fan base in India and it's time the actor plans his India tour. But while he does that, here's a quick listicle of his best roles so far. 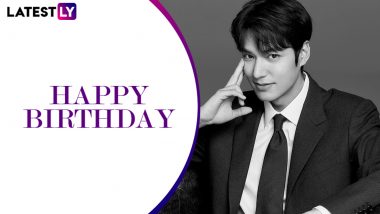 Lee Min-ho, the popular South Korean actor celebrates his birthday on June 22. While his fans all over were eagerly waiting to ring in the occasion, the day has finally arrived and they certainly can't keep calm. Lee Min-ho has an equally huge fan base in India and it's time the actor plans his India tour. But while he does that, here's a quick listicle of his best roles so far. Let's get acquainted with his brilliance and understand the reason behind everyone's obsession with him. The King: Eternal Monarch Review: Lee Min-Ho's Comeback With The Netflix Show Confuses The Hell Out Of You Before It Settles Down

On Lee Min-ho's birthday, we take a look at some of his best roles so far.

For those looking out for a romantic show, The Heirs is the right pick for you. Lee Min-ho's character is studying abroad when he meets the love of his life. But when the couple returns to Korea, he realises that she's the housekeeper's daughter and the same annoys his family too much. Now it's up to him to convince his family and fight for his true love.

The Legend of the Blue Sea

A fantasy movie where he plays the role of Heo Joon Jae, a con artist who meets a mermaid. For someone like her who has never lived in a modern world, he becomes her friend and also a guide. There's also another parallel story running along with their past lives. The question is will history repeat itself or will it change this time? Watch the movie to find out.

Much like our John Abraham-Abhishek Bachchan starrer Dostana, Personal Taste is about an architect who falls in love while pretending to be gay. In this case, it's just one handsome architect instead of two hunks!

Bounty Hunters has to find a place in Lee Min-ho's list of entertaining movies. Two suspended Interpol officers are soon turned into suspects of a terrorist attack and all they can do is either prove their innocence or save themselves from a group of bounty hunters who are determined to find them.

Politics plays a brutal game with two orphaned boys who end up in different gangs. These boys who were once like brothers are now set to lock horns with each other. Will their relationship survive this fight or will they kill each other in this political turmoil? Watch the movie to find out.

(The above story first appeared on LatestLY on Jun 22, 2021 09:00 AM IST. For more news and updates on politics, world, sports, entertainment and lifestyle, log on to our website latestly.com).