OTT platforms, which expanded their numbers and footprints at a time when the pandemic raged and the cinemas were shut, however, may not be affected by the return of the movie theatre experience. Trade analysts believe that both view channels shall co-exist. 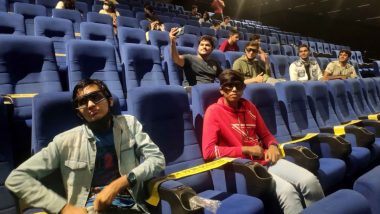 Bollywood breathed a sigh of relief on Friday when cinema theatres across Maharashtra, the source of 50 per cent of the Hindi film industry's earnings, opened after a Covid-imposed shutdown that stretched across a year and six months. Gautam Dutta, CEO, PVR Cinemas, expressed the industry-wide sentiment when he said: "It is heart-warming to reopen our cinemas once again in Maharashtra as it holds the key to the revival of the multiplex industry. The opening of Maharashtra is significant especially for us as our screen presence in the state is the highest in our circuit." Naga Shaurya’s Varudu Kaavalenu Gets U/A Certificate, Film To Release In Theatres On October 29.

Talking about the first-day response across theatres in Maharashtra, Rajeev Patni, CEO, INOX Leisure, said: "We are delighted to share that we were almost sold out for these shows across all our multiplexes in Maharashtra. The overall turnout during the day so far has been reminiscent to the pre-COVID days and we are certain that the sentiment would remain like this." PVR Launches Luxury Theatre Brand PVR Maison at Jio World Drive, Ahead of Reopening of Cinemas in Maharashtra.

A similar sentiment was echoed by Devang Sampat, CEO, Cinepolis India. He said: "The audiences are coming back with great enthusiasm. We are seeing excellent footfalls in all our cinemas in Mumbai and in the rest of Maharashtra. This excitement will only build further as we move into the festive week of Diwali."

Of course, all eyes are on the big Diwali release, the action drama "Sooryavanshi", starring Akshay Kumar and Katrina Kaif, with Jackie Shroff and Gulshan Grover in supporting roles, and cameos by Ajay Devgn and Ranveer Singh. Will it be the blockbuster that will herald the return of the cinema exhibition business to its glory days?

OTT platforms, which expanded their numbers and footprints at a time when the pandemic raged and the cinemas were shut, however, may not be affected by the return of the movie theatre experience. Trade analysts believe that both view channels shall co-exist.

According to Komal Nahata, a respected voice in the fraternity, it will be a win-win situation for all, where all three platforms -- the big screen, television and OTT -- will co-exist happily together. In the short run, however, "films are going to have a very good run at the box-office because people are tired of watching them on the small screen," Nahata said and added: "They want to come out and watch films on the big screen. We just have to wait and watch, the collections are going to be unprecedented!"

But OTT platforms are here to stay -- and grow. "I don't think the re-opening of cinema theatres in Maharashtra will impact the OTT platforms because a lot of films have already been premiered on them and now producers have also realised they can make OTT-specific content. Films will now be premiered in cinemas and then released digitally, but there will be films and programming developed especially for the OTT audience," Nahata pointed out.

(The above story first appeared on LatestLY on Oct 22, 2021 10:56 PM IST. For more news and updates on politics, world, sports, entertainment and lifestyle, log on to our website latestly.com).