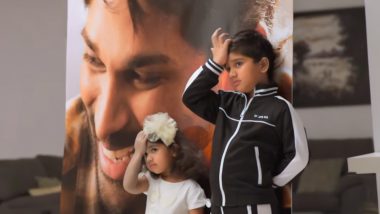 On November 13 the makers of Ala Vaikunthapurramuloo announced that they would be releasing the teaser of the film’s third single titled "OMG Daddy". The title of the track gave away the hint that this song is going to be a Children’s Day special track. But did you guess that it would feature the Tollywood superstar’s adorable munchkins? Well, Allu Arjun’s son Ayaan and daughter Arha have made their debut with this track, "OMG Daddy". We think it was the perfect surprise for all fans of Allu Arjun, especially on the occasion of Children’s Day 2019. Ala Vaikunthapurramuloo Song Samajavaragamana Highlights Allu Arjun and Pooja Hegde’s Romantic Chemistry in Trivikram Srinivas Directorial (Watch Video).

Allu Arjun never fails to amaze his fans and this song "OMG Daddy" has turned out to be a perfect treat on this day. In the song you’ll see a huge poster of Allu Arjun and his two kids standing in front of it, doing all the possible antics. Well, this teaser is cute and it has won our hearts. While sharing the teaser of this track the makers captioned it as, “A Children's Day treat from Stylish Star @alluarjun and #AlaVaikunthapurramuloo team. #AlluArha & #AlluAyaan present you our #OMGDaddy song teaser!! Full song will be out on 22 Nov. #AVPL3rdSingle”. Ala Vaikunthapurramuloo: Tabu’s New Look from Her Upcoming Telugu Movie Is the Birthday Gift for Her Fans (View Pic).

Watch The Teaser Of The Song OMG Daddy:

Ala Vaikunthapurramuloo features Pooja Hegde opposite Allu Arjun. The film’s music and background score has been composed by S Thaman. This is the third time that Trivikram Srinivas and Allu Arjun have collaborated for a film. They had earlier come together for S/O Satyamurthy and Julai. Ala Vaikunthapurramuloo produced under Geetha Arts and Haarika & Hassine Creations banners, is all set to be released in January 2020.

(The above story first appeared on LatestLY on Nov 14, 2019 10:27 AM IST. For more news and updates on politics, world, sports, entertainment and lifestyle, log on to our website latestly.com).