CBI 5 – The Brain Review: Mammootty as Officer Sethurama Iyer Impresses the Critics in This Thriller by K Madhu

CBI 5: The Brain is the fifth film in the CBI franchise which began in the year 1988. Helmed by K Madhu, Mammootty-starrer is all set to release at the theatres on May 1, 2022. Read the film's reviews here! 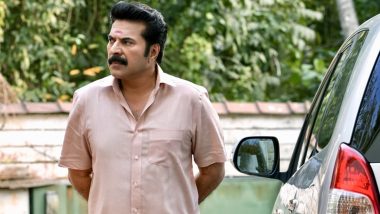 CBI 5: The Brain starring Mammootty is finally out in theatres. The highly anticipated South movie is directed by K Madhu and written by SN Swami. The Malayalam flick is said to revolve around a basket killing of several people connected to each other. With CBI 5, Mammootty returns as officer Sethurama Iyer. Having said that, many critics have watched the fdfs of the flick and have given it positive ratings. Here, check out the review compilation of CBI 5: The Brain below. CBI 5 – The Brain Review: Mammootty’s Mystery Thriller Receives Mixed Response From Netizens.

TOI: "Delightfully star-studded and twisty, the film is a mystery-laden treat to those who love the franchise and the genre. Just stay away from spoilers as smartly as you can!"

Indian Express: "Mammootty, as usual, was effortless as Sethurama Iyer. Some of his minimalistic expressions were enough to create impact in theaters. Sai Kumar also took off from where he had left in the third part of CBI, reminding one of late actor Sukumaran’s mannerisms." CBI 5 – The Brain Movie: Review, Cast, Plot, Trailer, Release Date – All You Need To Know About Mammootty’s Investigative Thriller.

OTT Play: "Sethurama Iyer’s fifth outing is a well-written investigative thriller that has the sleuth facing off against opponents that are as smart as him. While the film is overloaded with red herrings, once it narrows its focus and finds its footing, it’s an engaging watch to see Iyer use his genius, with able and delightful support of his previous aides, to uncover the truth and make his case."

(The above story first appeared on LatestLY on May 01, 2022 03:46 PM IST. For more news and updates on politics, world, sports, entertainment and lifestyle, log on to our website latestly.com).