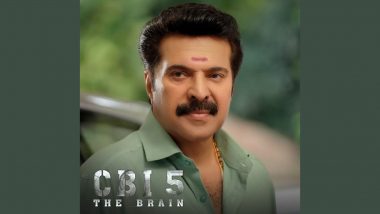 CBI 5 – The Brain is the upcoming Malayalam investigative thriller in which Mammootty would be reprising his role as CBI officer Sethurama Iyer. Mukesh and Jagathy Sreekumar too would be reprising their roles in the fifth installment of CBI film series. Helmed by K Madhu and written by SN Swamy, it is one of the iconic film series that Mollywood lovers are eagerly looking forward to. CBI has been one of the popular films of Malayalam Cinema and Mammukka’s role in it has always been cherished by the audience. CBI 5 – The Brain: Fans Thrilled To See Jagathy Sreekumar Making A Comeback With Mammootty’s Investigative Thriller!

There’s just few days left for the release of CBI 5 – The Brain that is produced under the banner of Swargachithra Films. Ahead of its worldwide release, let’s take a look at some of the key details of this movie.

Plot – The investigate thriller revolves around a chain of suicides and disappearances that occur in God’s own country and the similarity of these incidences is noted by the CBI officer. The disappearances was ruled as pranks by police during investigation.

Watch The Trailer Of CBI 5 – The Brain Below:

Release Date – Mammootty’s investigative thriller, the fifth installment of CBI film series, is all set to be released in theatres on May 1.

Reviews – The reviews for CBI 5 – The Brain are not yet. As soon as the reviews will be out, LatestLY shall update you all with the same.

(The above story first appeared on LatestLY on Apr 29, 2022 12:27 PM IST. For more news and updates on politics, world, sports, entertainment and lifestyle, log on to our website latestly.com).