Actor Chiyaan Vikram's next movie has been officially confirmed and it is the highly discussed collaboration with Petta director Karthik Subbaraj. Titled Chiyaan 60, the movie will see Vikram sharing screen space with his son Dhruv Vikram. 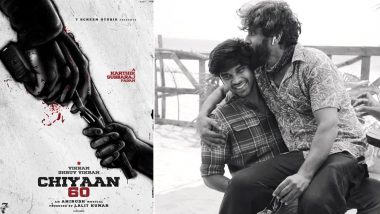 South actor Chiyaan Vikram's next movie has been officially confirmed and it is the highly discussed collaboration with Petta director Karthik Subbaraj. And what's an add on that has left the superstar's fans excited is that Vikram will be seen sharing screen space with his son Dhruv Vikram in the movie whose working title is Chiyaan 60. Vikram's son Dhruv made his debut with the Tamil remake of Arjun Reddy, titled Adithya Varma and created a space in the hearts of the audience with his acting prowess. Chiyaan 60: Vikram’s Next Film To Be Directed By ‘Petta’ Fame Karthik Subbaraj?.

Dhruv Vikram and Karthik Subbaraj both announced the exciting news on their respective social media handles today. They also released the first poster of the movie which is very intriguing. Adithya Varma Quick Movie Review: Dhruv Vikram Makes For An Apt Choice In The Tamil Remake of Arjun Reddy!.

Check Out Dhruv Vikram's Announcement Below:

I’ve always been excited to watch a Karthik Subbaraj film’s FDFS. I’ve always listened to Anirudh’s albums on loop. I’ve always been my dads biggest fan. If this is my dream come true, please don’t wake me up! @7screenstudio @anirudhofficial @ksubbaraj @the_real_chiyaan

And like the poster also suggests, Chiyaan 60 will be a gangster movie. There have been reports of how the Subbaraj had narrated the script to Vikram back in 2017, but with both of them being extremely occupied with their other work commitments, Chiyaan 60 was pushed back until now. Stay tuned here for more updates!!

(The above story first appeared on LatestLY on Jun 08, 2020 06:03 PM IST. For more news and updates on politics, world, sports, entertainment and lifestyle, log on to our website latestly.com).