Chiyaan 60: Vikram’s Next Film To Be Directed By ‘Petta’ Fame Karthik Subbaraj?

It is heard that the 37-year-old director Karthik Subbaraj would be teaming with Chiyaan Vikram for the upcoming project, which is tentatively titled as Chiyaan 60. 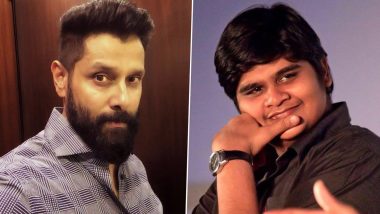 Director Karthik Subbaraj is one of the popular filmmakers of Kollywood. He has worked with some of the established actors of Tamil Cinema and that includes Vijay Sethupathi (Pizza), Siddharth (Jigarthanda), Rajinikanth (Petta), among others. Now it is heard that the 37-year-old director would be teaming with Chiyaan Vikram for his film, which is tentatively titled as Chiyaan 60. Chiyaan Vikram's Look as Mahavir Karna Revealed! Director RS Vimal Shares BTS Video from the Upcoming Epic Film.

Chiyaan 60 is touted to be a gangster drama. About this project, a source close to the superstar told DT Next, “Talks are on for Chiyaan 60 with Karthik. Lalit Kumar is likely to produce a Vikram film again after Cobra. If things fall in place, an official announcement will be made soon. The shoot will go on floors soon and will simultaneously shot alongside Ponniyin Selvan.” Now if the reports of Chiyaan Vikram and Karthik Subbaraj collaborating for Chiyaan 60 are true, then this would be their first project together. Fans will surely be excited to watch these two teaming up for a film! D40 Motion Poster: Dhanush's Karthik Subbaraj Directorial Titled Jagame Thanthiram Looks Like a Badass Gangster Drama (Watch Video).

Chiyaan Vikram has two projects in his kitty – Cobra and Ponniyin Selvan. The shooting of Cobra is yet to be completed. The remaining portions have to be shot in Russia and it will happen once the lockdown is lifted. Meanwhile, Karthik Subbaraj’s upcoming film is with Dhanush that is titled as Jagame Thandhiram. This film was slated to hit the screens on May 1, but had to be postponed owing to the coronavirus pandemic.

(The above story first appeared on LatestLY on Jun 01, 2020 01:22 PM IST. For more news and updates on politics, world, sports, entertainment and lifestyle, log on to our website latestly.com).