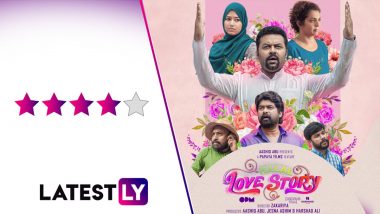 Halal Love Story Movie Review: When you see the title 'Halal' in the title of this new Malayalam movie, I am sure some among us have their right ears perked up. We most often hear the word 'Halal' when it comes to buying meat dishes, where the flesh has been taken from an animal slaughtered in a way that adheres to Islamic sentiments. The mention of 'Islamic' might have made more to scratch their right ears. Zakariya Mohammed's Halal Love Story pits Islamic teachings and values at the forefront of its satirical content, but surprisingly veers into a beautiful deconstruction of the system of marriage. Halal Love Story: Indrajith Sukumaran And Joju George's Movie Making Business Is A Hilarious Ride (Watch Video).

Halal Love Story is set around the period after 26/11 happened, when thanks to one man named Osama Bin Laden, the Muslims worldwide earned undeserving notoriety. It was also the time when SHARP televisions still used to grace our homes, and Shakeela tharangam was about to put Kerala under its sultry grasp.

In a village near Kozhikode, the local Muslim community, through its arts community, uses street plays and poetry clubs to create awareness about the atrocities done by George Bush's USA and dispel misconceptions about Islam. Deciding that they need a bigger scope to spread their message, the committee decides to make a film.

The responsibility for the same is undertaken by Rahim sahib (Nazar Karutheny), the committee head and Taufeeq (Sharaf U Dheen), a school-teacher, who hire an experienced movie AD, Siraj (Joju George) to direct the telefilm. Taufeeq himself has scripted the film, inspired by a religious story about "Moonamathavum Umma". They hire artistes from their street plays to be actors on the movie.

This also includes Shareef (Indrajith Sukumaran), a religious man with an artistic temperament, who is in a seemingly happy marriage with Suhara (Grace Anthony). Since Rahim Sahib and Taufeeq want real couples to play reel ones, they convince Suhara to play Shareef's onscreen wife. While Siraj struggles to make a movie worth his vision while also battling marital woes, Shareef and Suhara have their own predicament going on.

Zakariya Mohammed, who also played the patient zero in Aashiq Abu's acclaimed Virus, had made one of the most heartwarming films in recent times with his first film Sudani From Nigeria. Halal Love Story (also produced by Aashiq) exudes the same kind of emotions and warmth, this time with more popular faces in the cast but the excellence remains the same.  Watching Virus in the Times of COVID-19: 7 Lessons the Entire Nation Can Learn From Aashiq Abu’s Malayalam Medical Thriller.

In the beginning, Halal Love Story lets us into a feeling that like Rahim sahib, Taufeeq, and Shareef's ambitions, the movie is about cleansing misconceptions about Islam. Considering how the religion is being vilified these days over any random issue, I had no qualms with Zakariya taking such a direction with HLS. But I was pleasantly surprised to find Zakariya and Muhsin Parari's script shifting directions turning its social narrative into a humorous satire on making an indie film (with a sparkling cameo from Soubin Shahir) and then into a sensitized look at domesticity and equality.

It isn't that Halal Love Story forgets what it tried to begin with. In frequent interludes, Zakariya does take fun digs at the doggedness of the followers of the religion, in their attempts to push the progressiveness. A committee member is worried about the director's name as he wants a person whose identity had a broader recognition. He sighs relief when Taufeeq assures him that Siraj belongs to a different religion. In another scene, Taufeeq and Rahim have an argument with Siraj over including a hugging scene between the couple, as they feel it hints at sexual connotations.

The comedy portions will elicit a lot of chuckles, especially Shahir's sound engineer's attempts to quieten everyone. The amateurish performances of the telefilm's 'debutants' are also funny to watch as they bring their street play sensibilities that are ill-suited for the film's nuances. Kerala State Film Awards 2020: Android Kunjappan 5.25,  Kumbalangi Nights, Moothon and More – Where to Watch the Winning Malayalam Movies Online.

Halal Love Story, beautifully photographed by Ajay Menon, gets better, however, when it comes to the love story aspect. Once again, we are reminded of some very talented actors with no star-parent credentials who have managed to impress us in the past few months. HLS has a few such fine examples in the cast, including the likes of Joju George and Sharaf U Dheen. But let's talk about how wonderful an actress Grace Antony is.

Having seen her impress in films like Happy Wedding and Kumbalangi Nights, Grace's performance and her character is the soul of the film two-thirds on. Suhara is someone who was compelled to be a part of the film by her husband and his organisation members. We don't get to know much of her attitude towards her husband before marriage, except that she has a wicked sense of humour and she is a good householder.

In an Abhimaan-like twist, it turns out that Suhara is a better actor than Shareef. The experience of acting makes her express her own suppressed feelings. During an acting class, the trainer (Parvathy, bringing her excellence in a brief role) invokes the participants to share a painful memory blindfolded to their unseen listener. Suhara recalls a night after her father dies, where she was pained by something Shareef said. A feeling, she admits, she never realised she had until that moment. Unfortunately, an already jealous Shareef is hurt in the process. Thankfully, it is cinema itself that comes to the rescue for them.

Grace is just too brilliant in the role, giving one of the best performances in Malayalam cinema this year. The scenes where her innocent eyes show hurt at her husband's cold attitude is a glimpse the caliber of the actress. Indrajith Sukumaran does fine as her misogynistic husband, though he gets often overshadowed by his co-star. Is it me or was there a dig at nepotism by showing the character of Indrajith, who began his career as a star-kid, to be an inferior actor to that of Grace's, an outsider?

Even the rest of the cast is excellent. Sharaf U Dheen underplays himself in a serious role. Joju George continues his knack of delivering fine performances; as the frustrated but empathetic filmmaker. Nazar Karutheny as Rahim sahib is a natural find.

- The First Act Takes Some Time To Gets Its Groove

After Sudani From Nigeria, Zakariya Mohammed turns in another lovely offering with his sophomore effort. Halal Love Story is effortlessly charming, smart and wonderfully nuances, with an all-round excellent cast. The movie is streaming on Amazon Prime Video.

(The above story first appeared on LatestLY on Oct 15, 2020 12:01 AM IST. For more news and updates on politics, world, sports, entertainment and lifestyle, log on to our website latestly.com).