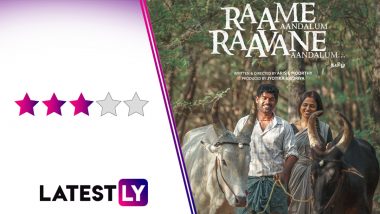 Kunnimuthu (Mithun Manickam), an inhabitant of a hamlet called Pooncheri, goes to the police station in the nearby town to file a complaint. He is made to sit on the floor (and later accidentally ushered into the jail), while the station in-charge is registering the complaint of a well-off man about his missing dog. When Kunnimuthu's turn arrives, he laments that his two kids aged four have gone missing.

The in-charge assumes he is talking about his sons, and is irritated when he learns that Kunnimuthu is talking about his bulls, Karappan and Vellaiya. The cop insults Kunnimuthu and drives him away. As Kunnimuthu returns to his village, there is a song playing in the background about whether justice can only delivered to a common man, only if he is wearing a suit. The songs further laments how the gods are always placed on high pedestals, so it takes a long time for them to hear the cries of those in the below rungs. So striking, the sentiments here!

With no help from the police, thus begins the arduous journey of Kunnimuthu and his wife Vellaiya (Ramya Pandian) to find their precious bulls, whom they have loved liked their own kids, and who disappeared from their shed mysteriously one night.

There is a sense of endearment that comes to you when you watch how Kunnimuthu and Vellaiya treat their bulls. Even their own relationship takes a backseat when it comes to their 'kids'. It is touching to see the naive Kunnimuthu rebel when anyone calls them as animals, or tries to pierce their ears or beat them up. The flashback scenes develop on this delightful bonding between the man and the beast, which add enough ethos to the present-day sequences of the lead's desperate search for his bulls. And while these scenes are affecting and heartwarming, the movie doesn't lack on humour.

Without resorting to farcical elements or garish humour, the comic quotient is subtle, effective and winsome. Mostly thanks to some sharp dialogues, and the performance of the cast mostl newcomers, especially Vadivel Murugan who plays Kunnimuthu's cousin Mannithiri.

Raame Aandalum Raavane Aandalum uses this adorable, and affecting tale to set up a satire on the plight of villages based in remote locations. It takes some sly potshots at demonetisation, PR-savvy-politicians, the culture of breaking news, the social disparity, the corruption in the name of development, media circus among others. Suriya 'Loves' His Fans' Recreation Of His Steps From Ayan Song Pala Palakkura Pagalaa Nee (Watch Video).

As long as these satirical elements are ties to Kunnimuthu and Vellaiya's story, Raame Aandalum Raavane Aandalum is immensely enjoyable. But soon their saga turn into a huge political circus, that takes a page out of the Aamir Khan production Peepli Live!, thanks to the intervention of a well-intentioned TV journalist (Vani Bhojan), who delivers the couple's story to her channel.

From hereon, till the climax, the focus settles on the journalist as she not only tries to help the couple get justice, but also the entire village. While these portions do have heart, and the intentions are right, the writing is very plain here and we have seen similar storylines in the past. I would have been a little more amicable if Kunnimuthu was helped in the process, but in the end, his plotline gets closure through a mere coincidence.

The climax, however, is tender, and wins you back. I also loved the songs in the film, be it the opening sequence, or the one that satirises the political plight of the country through a folk song. So are the performances, with Mithun Manickam and Ramya Pandian shining bright in their parts, and Vani Bhojan as the reporter. In fact every actor in the cast deserve an applause, be it the sharp thatha or the persistent old man toiling relentlessly in a dry field.

(The above story first appeared on LatestLY on Sep 24, 2021 12:01 AM IST. For more news and updates on politics, world, sports, entertainment and lifestyle, log on to our website latestly.com).