Jai Bhim is a legal drama based on a real-life legal case that happened in the '90s in Tamil Nadu, with Suriya stepping into the shoes of a real-life attorney Justice Chandru. The movie, dealing with atrocities on lower castes and custodial deaths, also stars Rajisha Vijayan, Lijomol Jose, Manikandan, Rao Ramesh and Prakash Raj. Jai Bhim is streaming on Amazon Prime Video. 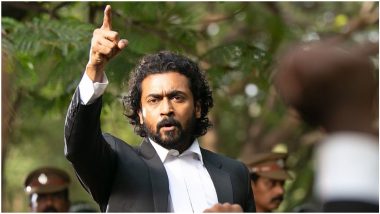 A few days ago, we have seen reports of how Jai Bhim, the 2021 Tamil film that had received widespread acclaim, has found a place in Oscars' YouTube channel. The almost 13-minute video shows footage from the film, and has the director TJ Gnanavel share his insights into making the movie. Many of the film's fans and the media saw this as the Suriya-starrer getting global recognition. With news that Jai Bhim is one of the two Indian films (the other is Mohanlal's Marakkar) to be among the 200 odd films eligible for the Best Picture Award at Oscars 2022, it became a double whammy for Jai Bhim's road to Oscar glory. Suriya’s Jai Bhim Gets Featured on the Official YouTube Channel of the Oscars.

However, while it is great to see an Indian film featuring on the Oscars' YT channel, there is something more that you should know of. A columnist called G Pradeep had tweeted on January 23 on how a film can be featured on the YT channel under the 'Scene at the Academy' featurette. He argued that any movie can be featured here, if the makers are willing to pay the fee, and he had posted screenshots of their eligibility guidelines. Suriya is also the producer of Jai Bhim.

If you pay Rs 3,72,000, the video will be published Oscar’s YouTube Channel. This is how Jai Bhim video is streamed in Oscar Channel. So actor Suriya started following cheap marketing tricks as like DMKians? pic.twitter.com/nFBA9YfG2D

This line of thought is also supported by acclaimed international columnist and critic Aseem Chhabra.

Hope you are now aware about how Jai Bhim managed to get the video on the Academy’s YouTube channel. Any film can buy that slot for $5,000.

What they are saying is also the truth. If you check the eligibility guidelines for submissions for 'Scene at the Academy', the points are made clearer. You can check the guidelines here.

Here's what the purpose of the featurette is - "Scene at the Academy focuses on filmmakers and artists talking about the evolution and breakdown of a scene (one or two scenes, maximum) or an element (i.e. song) in the film that captures and represents the approach to the movie. For example, writers discuss how scene(s) originated, directors talk about the considerations throughout, composers/songwriters explain storytelling through song, visual effects supervisors show how moments came to life, etc."

In the fourth point under the 'Additional Notes', the page confirms the submission fee - "Submission fee is $5,000". So yes, there is a fee, but wait there's more to know.

The fifth point is interesting, as it  says, "Limit to one per title, and only available for films being submitted for Best Picture consideration."

Now isn't that a reason for celebration? So what if the makers have to pay about Rs 3.72 lakhs to get their videos on the YouTube channel? We have already read the reports that Jai Bhim and Marakkar: Arabikadalinte Simham have been shortlisted as eligible movies for Oscars 2022 for Best Picture. So this is why they chose Jai Bhim because it is worthy of Oscars, right? Jai Bhim Movie Review: Suriya Puts His Best Foot Forward in This Powerful and Increasingly Relevant Legal Drama.

Here's another catch, though. Being eligible for Best Picture for Oscars 2022 isn't a yardstick enough. It is like National Awards of India considering all movies censored between a particular time period eligible for awards. Oscars 2022: Suriya’s Jai Bhim and Mohanlal’s Marakkar Are Among 276 Films Shortlisted for 94th Academy Awards.

You can submit your film and if it meets the parameters mentioned in the guidelines, which you can see by clicking here, then the Academy finds you eligible for Best Picture. Mind you, this is not a quality check round. That only comes later. The voting for the Oscar nominations is set to begin on Thursday, January 27, and it will continue until Tuesday, February 1. Only then we will know which movies are truly eligible for Best Picture nominees.

If you check the full list of films 'eligible' for Best Picture, you would find some critically reviled movies of 2021 in the list, like Clifford The Big Red Dog, The Boss Baby: Family Business, F9: The Fast Saga, Hitman’s Wife’s Bodyguard et al.

So being eligible for Best Picture at the Oscars doesn't mean that the Academy recognises you a film worthy of an nomination, just  that they are okay with you dropping your name in their hat as long as you meet their physical criteria. It is like paying a participation fee for a race. You will find your name in the list, but only the jury would decide if you are capable enough to run the final race. For Jai Bhim, and even Marakkar, that is a dream still far from accessible.

Now returning to the 'Scene at the Academy' guidelines, and let's talk about the 11th point in the 'Additional Notes', that would bring some cheer to Suriya fans. It says, "The Academy reserves the right not to exhibit, publish, distribute, or otherwise use the content for any reason the Academy deems appropriate."

So just by submitting a fee doesn't automatically give you a slot on the channel. You have to make sure your submission is upto the Academy's liking, and then only is the slot made available. It doesn't mean that the panel has seen the movie, but the video that you had submitted for the film met their requirements. The only other Indian movie to feature on the channel is Two, a short film by Satyajit Ray that was uploaded in 2016.

So that's quite a prestige partner to have in the club for Jai Bhim! It also helps that Jai Bhim has been getting good reviews everywhere which helped its case, including the news of it beating The Shawshank Redemption on IMDb, though that's different case-study altogether. Jai Bhim: Suriya's Acclaimed Film Enters IMDb's Top Rated 250 Movies; Soorarai Pottru Also Among 8 Indian Films In the List.

There is also a line of argument that by featuring on 'Scene at the Academy', Jai Bhim would get the needed exposure that would help the film get more attention from the jury panel. One thing that would go against it is that Jai Bhim has not even been chosen as India's Official entry for Oscars 2022 at Best Picture in a Foreign Language. That went to another Tamil film Koozhangal, which bowed out of the race later.

Even if Jai Bhim manages to get some attention from the YouTube channel of the Oscars, let's be realistic enough to see that the chances are quite low for the film to get into the final five. Jai Bhim hasn't gained as much critical attention on a global level as a film, like say Parasite, for the Oscar jury to consider a non-English film in the final list of Best Picture nominees.

What do you believe? Share your thoughts in the comments section below.

Jai Bhim is a legal drama based on a real-life legal case that happened in the '90s in Tamil Nadu, with Suriya stepping into the shoes of a real-life attorney Justice Chandru. The movie, dealing with atrocities on lower castes and custodial deaths, also stars Rajisha Vijayan, Lijomol Jose, Manikandan, Rao Ramesh and Prakash Raj. Jai Bhim is streaming on Amazon Prime Video.

(The above story first appeared on LatestLY on Jan 25, 2022 03:33 PM IST. For more news and updates on politics, world, sports, entertainment and lifestyle, log on to our website latestly.com).