Kamal Haasan's Indian 2, Thalapathy Vijay's Master Among Other Tamil Movies That Resumed Post-Production Work From May 11 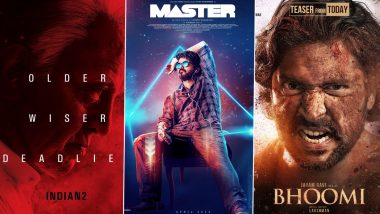 With Maharashtra being at the top of the list for having the most number of COVID-19 cases in India, amongst other industries, the worst-hit has been the entertainment industry. With Bollywood and Television shoots being shut down, there seems to be no relief in sight for the daily wage workers who were earning their money working on the sets. And while fraternity artists have come to their rescue with donations and provisions, the industries continue to remain shut. Kamal Haasan's Indian 2 Shelved? Here's What the Producers Have to Say.

However, that is not the case with the Tamil Nadu film industry. The government finally gave a nod to movie makers to resume only post-production work on their movies. South trade analyst Ramesh Bala, in a tweet, revealed a list of movies that have begun with their post-production work. Tamil Nadu CM K Palaniswami Allows Movie Post Production Work From May 11 Amid Lockdown.

He also mentioned that a few television shows and web series have also been given the go-ahead to start work on their shows. The decision to resume work was given the green light by the Government after 'Movie and television serial producers had requested the government to permit post-production work'. Makers can begin their post-production work with limited workers, with a team of maximum 5 on editing, dubbing, digital intermediate, re-recording, sound design and mixing, and a team of 10-15 for computer and visual graphics.

(The above story first appeared on LatestLY on May 11, 2020 07:55 PM IST. For more news and updates on politics, world, sports, entertainment and lifestyle, log on to our website latestly.com).