Now that the film has finally made it to the theatres, Dhanush's fans have been flooding Twitter with love for the film. The netizens have declared the film a megahit and Dhanush has yet again made a mark. 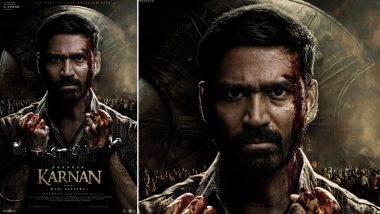 After a long wait and a year-long lockdown, the audience was more than ready to see their favourite star, Dhanush on the big screen. Back in February, the actor announced that his upcoming Tamil film Karnan will have a worldwide theatrical release on April 9. The fans were excited to see Dhanush in a new avatar and finally witness him in an action avatar today. The film has reached the theatres and is creating quite a buzz for itself. Karnan: Dhanush Confirms 90% of the Shoot Is Completed!

The action-drama, is helmed by Mari Selvaraj of Pariyerum Perumal fame. The film was said to get an OTT release but the makers decided to wait and release the film in theatres. Dhanush had thanked the producer of the film, Kalaippuli S Thanu, for opting for a theatrical release despite other available options to screen the movie."Karnan releases April 2021 in theatres. A much needed encouraging news at the right time. Thank you Thanu sir for thinking of the theatre owners, distributors, exhibitors and everybody whose livelihood is dependant on films and theatres, even though you had other options.

"A big thank you on behalf of my fans as this means a lot to them. Love you all. Spread Love," the actor had tweeted. Karnan: Makers of Dhanush’s Film with Mari Selvaraj Release Title Look on the Actor’s 37th Birthday.

Now that the film has finally made it to the theatres, Dhanush's fans have been flooding Twitter with love for the film. The netizens have declared the film a megahit and Dhanush has yet again made a mark. A user went ahead to say that the film deserves a National Award as well. People are loving the second half of the film which is emotional and engaging for the audience. Karnan is a mass entertainer that is winning everyone's heart.

.@mari_selvaraj creates a very strong visual imagery using metaphors. @dhanushkraja is one of the very few heroes who submits himself to the vision of the director.

The story is caught in a loop. Waiting to witness more.

What an asset @Music_Santhosh is. #Karnan

#Karnan in one word "MASTERPIECE" - career best movie for @dhanushkraja !

5 out of 5 , Must Must Must Must Watch ! Paaaaah no words to say ! Another national award for sure ! If choosing script is an art then Dhanush is Picasso of it ! There will be zero haters for D hereafter!

#Karnan - Masterpiece. As expected, Bit slow but the way of Making is too Good. Top notch Cinematography from the DOP. SANA's bgm makes much more. Worth watching.

#Karnan is an artisanal delight, the sort of film that re-establishes your faith in cinema. The setting, its narrative journey & the dramatic tension charged with intent, full of symbolism, mercilessly communicates the oppression & the resistance with powerful imagery!

Career-best performance for D man @dhanushkraja lived as karnan character! What else we can expect more from him ? @mari_selvaraj this content and the way you picturized the movie is outstanding! SaNa bgm is truly International level.. Must watch..

#Karnan Declared as Mega Hit Blockbuster of the decade ! Frame by Frame @dhanushkraja 's acting looks terrific 🔥 , he is absolute stunner of the show , the emotions that he carrying throughout the movie proved that he is a gem of Kollywood industry ! Sooo proud of Dhanush sir !

Besides Karnan, the other Tamil film that Dhanush has in his kitty is Jagame Thandhiram. Rumours are doing rounds citing that the makers are eyeing to release the film on Netflix in March. However, there has been no official announcement on it yet. He also has Atrangi Re in his kitty.

(The above story first appeared on LatestLY on Apr 09, 2021 04:28 PM IST. For more news and updates on politics, world, sports, entertainment and lifestyle, log on to our website latestly.com).