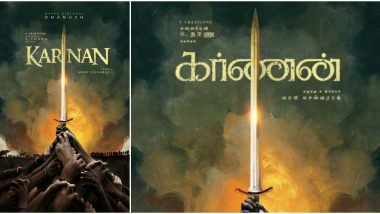 Fans of Dhanush are in for some major on the occasion of the Kollywood superstar’s 37th birthday. Earlier today, the makers of Jagame Thandhiram, written and directed by Karthik Subbaraj, had released the first single titled “Rakita Rakita Rakita” and this lyric video has turned out to be a hit among the fans. And now, the makers of Karnan have released the title look poster of this upcoming flick that is helmed by Mari Selvaraj. Karnan: Dhanush Confirms 90% of the Shoot Is Completed!

The title look poster of Karnan does not feature Dhanush, but it only shows a group of women’s hands holding a sword set against a rural backdrop. Producer Kalaipuli S Thanu, who is producing the film under the banner of V Creations, has also announced that today evening, at 5.55pm, the team would be sharing a glimpse of the making of Karnan on YouTube. This is indeed going to be a roller coaster ride for all fans of Dhanush. Karnan: Dhanush’s Film Is Not Based on Kodiyankulam Caste Riots, Confirms Director Mari Selvaraj.

There were rumours doing rounds that Karnan is based on Kodiyankulam Caste Riots. However, the film’s director had clarified stating that Karnan is not related to the controversial communal clash. Regarding the cast, this film also features Rajisha Vijayan, Lal, Yogi Babu and Natty in key roles.

(The above story first appeared on LatestLY on Jul 28, 2020 02:44 PM IST. For more news and updates on politics, world, sports, entertainment and lifestyle, log on to our website latestly.com).