Keerthy Suresh to Tie the Knot With Rumoured Boyfriend Anirudh Ravichander This Year?

Anirudh is also a close relative of superstar Rajinikanth. Anirudh and Keerthy have many common friends and they reportedly started seeing each other after they met through some friends. 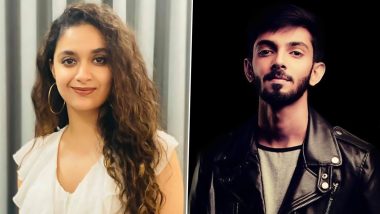 Keerthy Suresh is winning on the professional front and is gearing up for the many films that she has signed. While we will get to see the actress on the big screen very soon, reports suggest that she is doing well on the personal life front as well. The actress is rumoured to be in a relationship with music director Anirudh Ravichander and the love birds are all set to take their relationship to the next step. Yes, you read that right! Keerthy and Anirudh are reportedly getting married this year. COVID-19 Effect: Penguin Actress Keerthy Suresh Decides to Take a Pay Cut, Will Slash her Remuneration by 20 - 30%.

Many reports online suggest that Keerthy and Anirudh will be getting hitched by the end of the year. While they may not have officiated their relationship in public, it is being speculated that they will be making the wedding announcement soon. Earlier, Keerthy Suresh was rumoured to be getting married a BJP leader’s son. It was said that the actress' parents had fixed the alliance. However, they later had rubbished those reports. Now, we can only wait for the couple to officially making their nuptial plans public.

Anirudh Ravichander is a celebrated musician in the South Indian film industry. He has a huge following and his recent work includes music in films like Jersey and Master. Anirudh is also a close relative of superstar Rajinikanth. Anirudh and Keerthy have many common friends and they reportedly started seeing each other after they met through some friends. Anirudh Ravichander Birthday: From Jersey's Adhento Vunnapaatuga Gaani to David's Kanave Kanave, Songs That the Music Composer Blessed Us With.

Earlier, Keerthy Suresh was headlining the news when she made it to the coveted list of Forbes India 30 under 30. The actress took to Twitter and shared the news saying, "Honored to be one among the different walks of fame in the #ForbesIndia30U30. Thank you so much." Workwise, she will be seen in Sarkaru Vaari Paata alongside Mahesh Babu as the lead actor. Apart from the leads, the movie also stars Vennela Kishore and Subbaraju. The film will release on Sankranthi 2022.

(The above story first appeared on LatestLY on Feb 14, 2021 04:06 PM IST. For more news and updates on politics, world, sports, entertainment and lifestyle, log on to our website latestly.com).