KGF continues to mint money at the box office despite stiff competition. 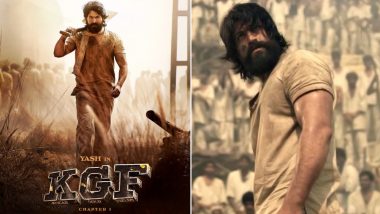 Apart from Ranveer Singh and Sara Ali Khan's Simmba, there is one more film which got cash registers ringing after releasing last month on December 21 and that's Kannada movie KGF Chapter 1. Dubbed in Hindi, the action drama which stars Yash and Srinidhi Shetty in the lead has surprisingly performed well at the ticket windows despite receiving a lukewarm response from the critics. The movie, which released alongside Shah Rukh Khan's much-hyped Zero, has minted Rs 42 crore in Hindi so far. Apart from Khan's film, KGF also faced competition from Simmba and then recently released Uri: The Surgical Strike. But the film has held up well at the box office despite all the competition. KGF Chapter I Movie Review: Yash Stands Tall in This Needlessly Stretched Violent Saga.

Apart from the Hindi version, Yash's film has also fared exceptionally well in Kannada too. At the worldwide box office, the Prashanth Neel directorial has become the first Kannada movie to surpass the Rs 200 crore mark which is remarkable. And in Hindi, KGF has become the fourth highest grossing dubbed film after Baahubali: The Conclusion, 2.0 and Baahubali: The Beginning.

(The above story first appeared on LatestLY on Jan 14, 2019 03:01 PM IST. For more news and updates on politics, world, sports, entertainment and lifestyle, log on to our website latestly.com).