The first look poster of Sanjay Dutt from the film, KGF Chapter 2 was unveiled on his birthday today. The sequel of the Kannada blockbuster, KGF, is currently being shot. The movie stars Yash in the lead role. Details of Sanjay's role are bing kept under wraps. All we know is that he will be called Adheera. 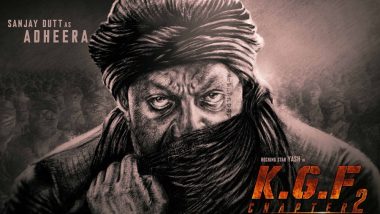 The first chapter of the film series, KGF, became a fan-favourite. Now, the second chapter of the film is in the making and Bollywood superstar, Sanjay Dutt, will be joining the cast. On the actor's birthday today, the makers of the film have released the first look at the character, Adheera, that he'd be playing. We have to say we are impressed. Sanjay's face is not entirely visible but he manages to paint a fierce picture, nevertheless. There is a tattoo on his face that looks badass. His eyes are menacing.

The speculations around Sanjay's addition to the cast of KGF: Chapter 2 had been fodder for internet gossip for weeks. The makers only made it official with the poster that was released today. Rumour has it that Raveena Tandon has also been approached to play a pivotal role in the sequel of the Kannada blockbuster. We wonder now, if Raveena's poster will be revealed on her birthday in October. KGF Chapter I Movie Review: Yash Stands Tall in This Needlessly Stretched Violent Saga.

KGF Chapter 1 starred Yash in the lead role. The movie garnered Rs 250 crore at the global box office, thus becoming the most successful Kannada film to date. The movie was distributed by Farhan Akhtar in the Hindi region. Farah and Anil Thadani, Raveena's husband, also distributed the film globally. We are looking forward to the next chapter of Rocky Bhai's next adventure.

(The above story first appeared on LatestLY on Jul 29, 2019 11:26 AM IST. For more news and updates on politics, world, sports, entertainment and lifestyle, log on to our website latestly.com).