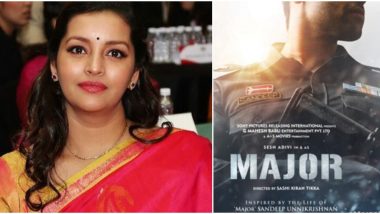 It was almost a year ago when Mahesh Babu had announced that he would be producing the biopic titled Major, based on the life of the national hero, Sandeep Unnikrishnan. Directed by Sashi Kiran Tikka, this film is being produced under the banner of GMB Entertainments. It was also confirmed that Adivi Sesh has been roped in to play the titular role in this Hindi – Telugu bilingual. It was recently confirmed that Made in Heaven fame Sobhita Dhulipala has also been roped in to play a key role in this movie. MAJOR: Mahesh Babu Announces Biopic on Martyr Sandeep Unnikrishnan, Adivi Sesh to Play the Lead - Check Out First Poster.

Since quite sometime the buzz was rife that Pawan Kalyan’s ex-wife, former actress Renu Desai has also been roped in for Mahesh Babu’s production venture. However, the makers had not made any official announcement on it. But if the reports were to be believed, then the film Major would have marked as her comeback in the industry. But the actress has clarified citing that she has not signed any film, reports Telugu Cinema. Major: Sobhita Dhulipala Joins The Cast of Adivi Sesh's Film Based On Major Sandeep Unnikrishnan.

Renu Desai was quoted as saying, “Some time ago, I had responded positively to a question whether I would play mother roles if the offers come my way. Apparently, this answer has been twisted. Truth is that I have not signed any film.” The makers are yet to announce the release date of Major.

(The above story first appeared on LatestLY on Jun 29, 2020 04:52 PM IST. For more news and updates on politics, world, sports, entertainment and lifestyle, log on to our website latestly.com).