Man Vs Wild With Rajinikanth! Bear Grylls and Thalaiva Shoot For a Special Episode and We Can't Wait!

The south cinema actor is all set to walk into the woods with host Bear Grylls and this is far the happiest news of the week. 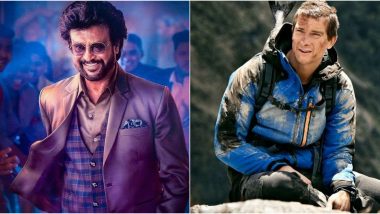 Look who is gracing one of the most fascinating shows, Man Vs Wild! Yes, it is the nation's beloved superstar Rajinikanth! The south cinema actor is all set to walk into the woods with host Bear Grylls and this is far the happiest news of the week. As per a Times Now report, the shoot is currently going in Karnataka's Bandipur forest. Wow, now that's an episode the netizens will be glued to with utter interest. Thalaivar 169: Rajinikanth’s Next to Be Directed by Lokesh Kanagaraj!.

For the uninitiated, the Discovery Channel show's format has Grylls and his video team dropped on a risky, uncharted territory. They then have to survive this trip and reach safely to the destination given, adjusting with food unavailability, danger zones and wild animals at times. He has done such special episodes with celebs before as well and they have always been fun to watch. It will indeed be an amazing watch and to see the wanderer in Thalaiva!

Earlier, it was reported how the star was stranded at Chennai airport because of a technical glitch in his flight. They had to have an emergency landing at the airport to avoid an unfortunate incident. He was flying to Karnataka probably for the shoot of the same.

On the work front, the actor was seen in the blockbuster Tamil film, Darbar. The film earned a heavy amount at the ticket windows. Next, he is gearing up for Thalaivar 168 that is also starring Keerthy Suresh, Meena and Khushbu. But before that, we are super excited to watch this starry and 'wild' episode!

(The above story first appeared on LatestLY on Jan 28, 2020 11:32 AM IST. For more news and updates on politics, world, sports, entertainment and lifestyle, log on to our website latestly.com).