Master: Arjun Das Reveals When The Trailer of Thalapathy Vijay Starrer Will Be Released! (Watch Video)

Arjun Das shared an important update on Master trailer and since then fans have gone bonkers. During a live session with fans, the actor shared when the trailer of Master will be dropped online. 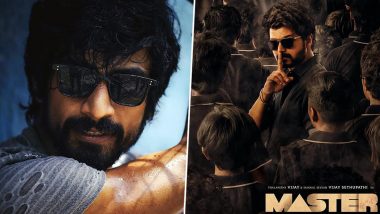 There’s a video going of Arjun Das going viral and fans of Thalapathy Vijay are using the hashtag #MasterTrailer, which is trending on Twitter. The reason behind it to be one of the top trends of the day is because of what actor Arjun Das shared. The handsome hunk shared an important update on Master trailer and since then fans have gone bonkers. During a live session with fans, the actor shared when the trailer of Master will be dropped online. Thalapathy Vijay, Malavika Mohanan, Vijay Sethupathi Starrer Master to Have a pan-India Release.

Arjun Das shared that he has already managed to watch the trailer of Master. The actor also revealed that he has watched the trailer not once or twice, but for almost six times. He has labelled the trailer of Master as ‘Marana Mass’. About the release date of the trailer, Arjun Das stated, “I think the trailer will release once the release date (of the film) is confirmed but trust me that whenever the trailer releases, it will be worth the wait.” He also mentioned, “I have a very strong feeling that one dialogue by Vijay sir is going to be crazy. I can't wait for all of you to watch the trailer so let's see.” Kamal Haasan's Indian 2, Thalapathy Vijay's Master Among Other Tamil Movies That Resumed Post-Production Work From May 11.

Master, directed by Lokesh Kanagaraj, was scheduled to be released on April 9. But due to the pandemic and since all the theatres had to be closed down, the makers are had to postpone the film’s release date. Then there were rumours that the makers of Master are planning to release the film on OTT platform. Then a source close to the development had clarified that the film will not skip its theatrical release. Even Arjun Das stated that Master will release only in theatres.

(The above story first appeared on LatestLY on May 18, 2020 10:52 AM IST. For more news and updates on politics, world, sports, entertainment and lifestyle, log on to our website latestly.com).