Master, directed by Lokesh Kanagaraj, was scheduled to be released on April 9. However, it did not see a theatrical release as per the set date owing to the coronavirus outbreak. 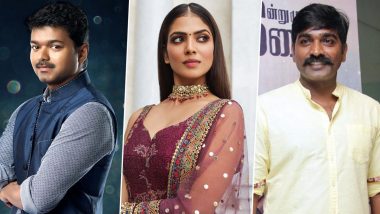 Master, directed by Lokesh Kanagaraj, was scheduled to be released on April 9. However, it did not see a theatrical release as per the set date owing to the coronavirus outbreak. Fans expressed how disheartened they were as they have to wait even longer for the film to release on the big screens. Although the makers have not announced the next release date, here’s another big news for all the fans who are eagerly looking forward to watch Master in theatres. The Thalapathy Vijay, Malavika Mohanan, Vijay Sethupathi starrer will be having a pan-India release. On Master’s Release Date, Makers of Thalapathy Vijay Release a New Poster; Fans Share How They Miss Celebrating #MasterFDFS Due To Coronavirus Lockdown.

So Master will be releasing not only Tamil, but in four other languages as well – Hindi, Malayalam, Telugu and Kannada. This major update was shared by the popular multiplex chain INOX on their Twitter handle, and since then fans are jumping with joy. Thalapathy Vijay has a huge fan following base across the country, and now since the film is releasing in multiple Indian languages, Master is going to be a treat for movie buffs. Master Song Vaathi Raid Lyrical Video Out! Vijay's New Song By Anirudh Ravichander Is Energetic.

Reports are rife that the makers of Master are planning to release the film on the occasion of Thalapathy Vijay’s birthday, which is on June 22. However, there has been no official announcement on it yet. If that happens, it would be double celebration for all Thalapathy Vijay fans. Stay tuned for further updates from the world of entertainment.

(The above story first appeared on LatestLY on Apr 22, 2020 12:45 PM IST. For more news and updates on politics, world, sports, entertainment and lifestyle, log on to our website latestly.com).