Naga Shaurya’s Look From Varudu Kaavalenu Revealed On His Birthday! Film To Release In May 2021 (Watch Video)

Its Naga Shaurya’s birthday today and the makers of Varudu Kaavalenu have dropped in the sweetest surprise for the actor and all his fans. 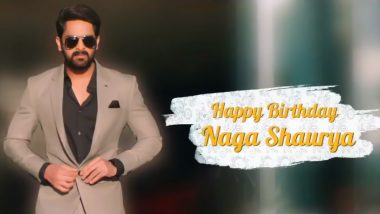 Its Naga Shaurya’s birthday today and the makers of Varudu Kaavalenu have dropped in the sweetest surprise for the actor and all his fans. The makers have shared a video, giving a glimpse of the actor’s suave look in the film. He is indeed an ‘uber cool groom’ as described by the makers. Naga Shaurya can be seen flaunting his chiseled body and getting all suited up. Without dropping much hint, but by just giving a pleasing background score, the makers have revealed this video. Naga Shaurya Teams Up With Director Aneesh Krishna For A Rom-Com.

Varudu Kaavalenu will feature Ritu Varma as the female lead. Touted to be a rom-com, the upcoming Telugu film is directed debutante by Lakshmi Sowjanya. While sharing the film’s title, Naga Shaurya had teased his fans by asking, ‘Should I say yes?’. Well, we must say that this ‘groom’ is looking charming enough and we just cannot wait to see the look of his onscreen bride. #NS20 First Look: Naga Shaurya Flaunts His Chiseled Abs and Bruises While Practicing Archery.

The music of Varudu Kaavalenu is composed by Vishal Chandrashekar. The other actors who would be seen playing a key role in this film are Murali Sharma, Nadiya, Vennela Kishore, Praveen and Harsha Vardhan. The makers have shared that Varudu Kaavalenu, produced under the banner of Sithara Entertainments, is scheduled to be released in May 2021.

(The above story first appeared on LatestLY on Jan 22, 2021 10:26 AM IST. For more news and updates on politics, world, sports, entertainment and lifestyle, log on to our website latestly.com).