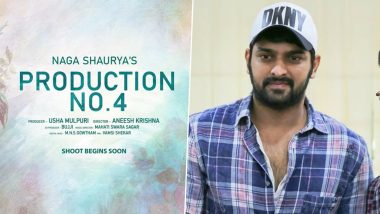 Naga Shaurya, the Telugu actor, is known for his performance in the National Award-winning anthology film, Chandamama Kathalu. Oohalu Gusagusalade, Dikkulu Choodaku Ramayya, Kalyana Vaibhogame, Jyo Achyutananda and Chalo are some of the other box office hits in which he has been featured. The 31-year-old Tollywood hunk, whose performance in Oh Baby was also praised, is now gearing up for his next project. The actor has teamed up with director Aneesh Krishna for a rom-com and the makers have shared an official announcement on the same. #NS20 First Look: Naga Shaurya Flaunts His Chiseled Abs and Bruises While Practicing Archery (View Pic).

Aneesh Krishna is known to helm films such as Ala Ela and Lover that released in 2014 and 2018, respectively. This upcoming rom-com will be the filmmaker’s third feature film. This untitled project will be bankrolled by Usha Mulpuri under the banner of Ira Creations. Mahati Swara Sagar has been roped in to compose the film’s music. In the statement issued, it read, “The movie is said to be surpassing family entertainer and will be produced by Usha Mulpuri.”

Naga Shaurya who is excited about his upcoming film tweeted, “Excited and thrilled to be part of this surpassing entertainer.” The makers have also revealed that the shooting of this Telugu project is expected to resume soon. Stay tuned for further updates!

(The above story first appeared on LatestLY on Oct 16, 2020 01:45 PM IST. For more news and updates on politics, world, sports, entertainment and lifestyle, log on to our website latestly.com).