On the newly released poster, the actor is seen in a rugged avatar. The sports drama is based on archery and that exactly is what Naga is seen practicing in the still. 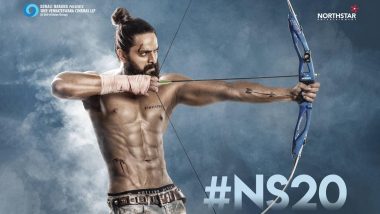 As the cine industry is getting back to normal, the fans are once again excited to know about new releases. In the past few weeks, many south movies were declared and announced leaving everyone much eager for what lays on the entertainment plate down south. Now, it's time for the Naga Shaurya fans to rejoice after a long time. Tentatively titled as #NS20, the actor graced the first look of the film and it looks promising. NS20: Naga Shaurya Flaunts His Chiselled Physique On the First Glimpse of His Upcoming Sports Drama (View Pic).

On the newly released poster, the actor is seen in a rugged avatar. The sports drama is based on archery and that exactly is what Naga is seen practicing in the still. He has his hair tied in a bun, giving him a swagger look. He poses shirtless for the picture. However, one cannot ignore those abs that he is flaunting along with bruises and tattoo too. His hand is also seen in a crepe bandage, piquing the interest of the fans. Here, take a look at the poster.

Naga reportedly had followed a strict diet in order to get into this shape that he is seen in. The sports drama required him to stick to work out regime for months now and he did it well as one can see. The movie has Ketika Sharma in the lead. The poster was released on the occasion of producer Narayan Das Narang's birthday. It is helmed by Santhossh Jagarlapudi.

(The above story first appeared on LatestLY on Jul 27, 2020 11:46 AM IST. For more news and updates on politics, world, sports, entertainment and lifestyle, log on to our website latestly.com).