Naradan is a Malayalam political drama directed by Aashiq Abu and written by Unni R. The movie stars Tovino Thomas, Anna Ben, Sharafudheen, Indrans, Renji Panicker and Vijayaraghavan. Naradan had released in theatres on March 3, 2022, and is now streaming on Amazon Prime VIdeo. 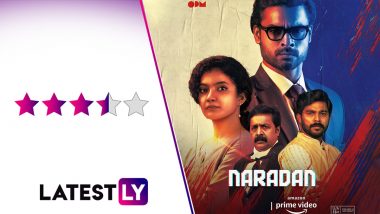 Naradan Movie Review: The makers of Naradan might vehemently say no, but there is no denying that the Aashiq Abu movie is heavily inspired by a certain loudmouth anchor-channel runner of propaganda-spewing news channel. As if the red hues of CP (Tovino Thomas)'s studio sets aren't clue enough. Naradan showcases the rise of CP, a hotshot TV News anchor who starts his own channel where he manipulates news to gain top position in TRP race. From slandering panel members to trying to be the moral custodian of the society, CP is the very epitome of what is wrong with Indian news media since... well, some time now. Naradan Movie Review: Tovino Thomas, Anna Ben’s Political Thriller Receives Positive Response From Twitterati.

As you watch the movie, you very well realise that Naradan, scripted by Unni R, has drawn inspirations from real-life events, including the heckling of a infamous news anchor on camera (who of course is the 'inspiration' here). The first half of Naradan shows the transition of CP from Chandra Prakash, once a top news anchor in a news channel called News Track. When we first meet Chandra Prakash, I want to believe he still has ethics, but is quite disillusioned with his bosses interfering with his news cycle and their constant clamouring for breaking news. It doesn't help his ego when another hotshot, and comparatively more honest journalist, Pradeep John (Sharafudheen) joins the same channel. Despite being friends, Chandra Prakash sees Pradeep as a threat and a slight to his tenure there, and resigns.

This begins downfall of the humanity in Chandra Prakash, as he forms his own news channel called Naradan News, gets himself a makeover and rechristens himself as CP and where his first breaking is a sting on a minister's sex scandal. This whole chunk will be easily relatable to those who has ever worked in a news channel or at least have been following the inglorious workings of such channels for the last few years. However, the movie starts off on a sluggish note as it awkwardly sets up most of the main characters and the central character's inner conflict. I felt the bar of the film only being raised when CP starts his Naradan News and gets into his first breaking news.

The commentary on the media is both scathing and incisive especially the obsession with TRP race and the inflatable egos of news anchors, and the use of certain real-life incidents only manage to make the movie feel so accessible. CP's turn to the dark side, from blackmailing his competitors to twisting the arms of his investors and politicians for his gains, make for a fascinating watch.

The second half gets into courtroom drama territory. The abrupt shift from a serious satire on media to a legal banter may feel jarring for some, but this is the portion I loved the most. Characters like Anna Ben's righteous social activist-lawyer Shaakira Mohammed and Indrans' Judge Chothi get more prominence here. There are quite a few enjoyable  massy moments; who would have once thought that there would come an era where character artistes like Indrans would get terrific slo-mo scenes and punch-lines, which used to be a prerogative of superstars.

But what's more, I do get the idea why Aashiq Abu wanted to spend Naradan's third act inside a court. He is reminding us that when democratic pillars like media falls to sycophancy, it is the judiciary that needs to be the resort for the common man to pull them up. Through Shaakira's effective arguments, the movie also reminds us of the waning respect the right to privacy has in the newsrooms, where any innocent person can be crucified based on whims and moods of the anchors there, the Aryan Khan and Rhea Chakraborty media trial being some glaring real-life examples that come to our minds. But with the dense air of negativity around us, the positive climax of the film feels stranger than fiction.

There are some subplots that doesn't feel completely justified. I was not a fan of how Sharafudeen's character was written out of the movie, considering he had a major focus in the first half. There is also the factor that only CP's channel gets to have the complete focal point of blame, which isn't the case. Channels like Narada News, or its errr... real-life counterpoint, are the products of years of corporate-sponsored, political agenda driven machinery that have taken some vicious turns these days which needed to be called out. Kunchacko Boban’s Pada, Tovino Thomas’ Naradan, Shane Nigam’s Veyil, Here Are The Malayalam Movies Set To Be Premiered On Amazon Prime Video!

The acting is also first-rate. It is quite riveting to see Tovino Thomas having fun with playing flawed characters in his recent movies. Be it Kala, Kaanekanne or Naradan, these aren't mere anti-heroes and they couldn't get away with whatever they do. Found a little weird when Tovino hammed it up to be CP, that sudden shift from being the anguished Chandraprakash to an preening know-it-all, but that's the point. It's a persona that he wants to project his massive ego on to, amidst the incessant vaping, and that makes for quite a charismatic and at the same time, detestable portrayal.

Anna Ben has some of the film's best dialogues, scoring well in the film's third act, and turning into Naradan's de-facto hero. And there's Indrans who is simply having the best phase of his career, taking on roles with some scene-stealing relish. Sharafudeen, Joy Mathew, Balachandran Chullikkad, Kunchan, Rajesh Madhavan, Rafi, Vijayaraghavan, Fejo (as rapper Mudiyan) are incredible in their roles.

- The Commentary on Indian Media

- A Couple of Key Characters are Shortchanged

While Naradan is good as a scathing take on TRP-driven yellow journalism functioning as media houses, it is the legal drama where the film turns for the better. With powerful performances from Tovino Thomas, Anna Ben and Indrans, the movie will leave you hopeful and in these times, hope can't be that bad, even in a film. Naradan is streaming on Amazon Prime Video.

(The above story first appeared on LatestLY on Apr 11, 2022 06:42 PM IST. For more news and updates on politics, world, sports, entertainment and lifestyle, log on to our website latestly.com).