The story of Nenjuku Needhi revolves around an upright city-bred police officer who launches an attack against the caste system in a village. Here, check out what critics have to say about the Tamil film. 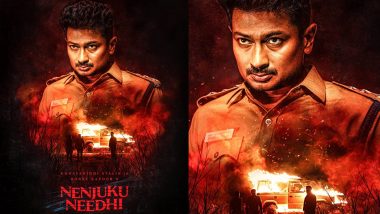 Tamil film Nenjuku Needhi released in theatres on May 20. Starring Udhayanidhi Stalin, Aari Arujunan, Tanya Ravichandran and Shivani Rajasekhar in key roles, the movie happens to be a political actioner. Helmed by Arunraja Kamaraj, this one is the South remake of  2019 Hindi film Article 15 starring Ayushmann Khurrana. Having said that, reviews of flick are all over the internet and they look great. The movie is produced by Boney Kapoor. Here, check out the review roundup of Nenjuku Needhi below. Nenjuku Needhi Teaser: Udhayanidhi Stalin’s Article 15 Remake Is a Hard-Hitting, Dark, Compelling Crime Thriller (Watch Video).

TOI: "Aari's character as Kumaran, a dalit leader and a revolutinist, is perfect. However, the makers could have concentrated more on his character with a backstory as it would have made us empathise with him. Tanya Ravichandran, who appears as a gender-equality activist, and Shivani Rajashekar, as Kurunji, do a good job."

Firstpost: "Udhayanidhi’s presence makes these additions more significant -- the actor’s political lineage and career are no secret. But there’s also no denying that they are well-done. Udhayanidhi’s involvement means we have a few shots of him against the rising sun. But thankfully, the film doesn’t indulge in them too much." Nenjuku Needhi Trailer: Udhayanidhi Stalin’s Tamil Remake of Article 15 Is a Hard-Hitting View on Caste Discrimination (Watch Video).

Behind Woods: "Nenjuku Needhi is a remake that not just stays honest to its original but at times is bolder and stronger than it. Arunraja Kamaraj has proven that he's a director with a strong voice, and he is here to stay. The message that the film conveys is noble and try not to miss this in theatres."

Well, after reading the reviews of Nenjuku Needhi above, seems like this one is a must-watch. Stay tuned!

(The above story first appeared on LatestLY on May 20, 2022 03:33 PM IST. For more news and updates on politics, world, sports, entertainment and lifestyle, log on to our website latestly.com).