The nation is #PrayingForNesamani, the comedian who played a key role in the Tamil film Friends. 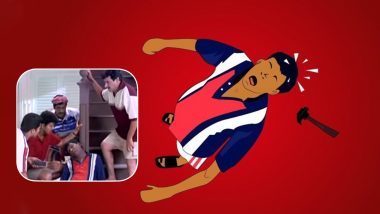 Comedian Vadivelu is a popular face down south and his role in the 2001 film Friends is unforgettable. His character in the film Contractor Nesamani is something the nation is talking about. Why is netizens ‘Praying For Nesamani’? The Tamil movie buffs and fans of Vadivelu have started the memes over Nesamani's epic scene from Friends and since then there is no stopping. The reason why Twitterati is asking to #Pray_For_Nesamani will actually drive away your midweek blues. Is Sunny Leone's Career Change Plan the Reason Behind Viral 'JCB Ki Khudayi' Memes? Check Out This Tweet!

The Tamil film Friends is a remake of the Malayalam film of the same name. The Tamil version starred Vijay, Suriya and Ramesh Khanna in the lead. The trend on Nesamani started when a Pakistan-based meme page posed a question by sharing a picture of a hammer. The question was, “What is the name of the tool in your country?”, reports News18.com. A fan of the Tamil comedian instantly connected it to the scene from the film Friends and from then on Nesamani memes has taken over the internet. Some even speculated that Nesamani might be unwell and hence that hashtag #Pray_For_Nesamani must be trending. Take a look at some of the hilarious memes below. Cannes Film Festival Funny Memes: From Deepika Padukone to Priyanka Chopra and Aishwarya Rai’s Outfits, All the Lit Desi Memes, Jokes and GIFs That Went Viral.

Madam Ji please pray for our beloved #NESAMANI to recuperate soon for the match not to be forestalled! Would appreciate if GCHQ could help CBI to investigate Krishnamurthy! #Pray_for_Neasamani #TeamIndia

Shin-chan praying for his thalaivar 🙏🙏 pic.twitter.com/zkl4iG8od4

But yes, Twitterati did realize that it was just for fun and comedian Vadivelu is doing absolutely well. This meme fest has turned out to be a huge stress buster for all the commoners! Pray For Nesamani has become a laughter riot for the netizens.

(The above story first appeared on LatestLY on May 30, 2019 11:05 AM IST. For more news and updates on politics, world, sports, entertainment and lifestyle, log on to our website latestly.com).